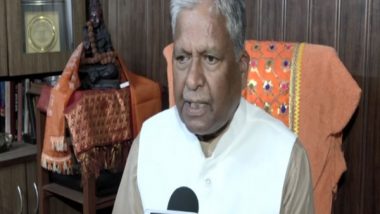 New Delhi [India], July 3 (ANI): Bhartiya Janta Party (BJP) Rajya Sabha MP from Uttar Pradesh, Ashok Bajpai hit out at Rajasthan Chief Minister Ashok Gehlot for calling Union Minister Gajendra Singh Shekhawat 'Nikamma' (useless), saying that the latter should get mental treatment."I think Ashok Gehlot should get mental treatment. He is quite old and the old-age effect is visible in his conduct about Union Minister Shekhawat who worked for providing tap water on such a large scale in a short time period. Whatever responsibility the government has entrusted, that responsibility has been discharged with great devotion by him," Bajpai told ANI.

He further heaped praises on the Union Minister and said that there will be fewer hardworking people like Shekhawat can be found. "I understand that there will be fewer people in public life as hardworking as Gajendra Singh Shekhawat and yet he is seen as 'Nikamma' then either there is a defect of Ashok Gehlot's vision or there is a need for mental treatment," he added

While addressing Congress leaders and workers at a meeting, he said, "We will ask the PM someday why he keeps such a nikamma (useless) minister who remains absent-minded in your meetings." (ANI)