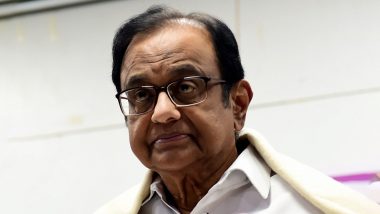 New Delhi, September 15: India is a unique parliamentary democracy where no questions are asked and no debate takes place, Congress leader P Chidambaram said on Tuesday after the party was not allowed to speak on the Ladakh standoff issue in the Lok Sabha.

Members of the Congress walked out of the Lok Sabha and staged a protest in front of the Mahatma Gandhi statue in the Parliament House complex after they were not allowed to speak following a statement by Defence Minister Rajnath Singh on the border standoff with China in eastern Ladakh. Rajnath Singh Issues Statement on India-China Face-Off in Parliament, Says 'Border Issue Unresolved, No Mutually Acceptable Solution Reached' (Read Full Text).

"India today is a unique parliamentary democracy where no questions can be asked and where no debate is allowed," he tweeted. Chidambaram also attacked the Centre for its statement that it does not have data on the number of migrants who died during the lockdown.

"India today is a unique country where no data is maintained about migrants who died on the long trek back home or died after they reached home," he said in a series of tweets.

"India today is a miracle nation where the 'fastest growing economy' turned into 'the deepest de-growth' in a matter of 3 months," he said. The country's GDP growth for the first quarter of 2020-21 declined by 23.9 per cent due to the lockdown imposed to contain the spread of COVID-19.