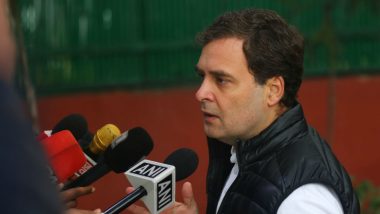 "It is clear from Defence Minister's statement that Modi ji misled the country on Chinese encroachment. Our country has always been, and will remain, with the Indian Army. But Mr Modi, when will you stand against China? When will we take back the land of our country from China? Do not be afraid to name China," Rahul tweeted. His remarks came in response to Rajnath Singh's statement on India-China border situation in Lok Sabha.

In his statement, Rajnath Singh said that Chinese troops had attempted to disturb usual patrolling in Galwan valley by the Indian side, which resulted in a face-off. Twenty Indian soldiers died in the face-off that took place on June 15. "Our brave soldiers laid down their lives and also inflicted costs including casualties on the Chinese side," Singh said. He acknowledged that no mutually accepted solution for border disputes has arisen.

"India and China are yet to resolve their boundary question. China does not accept the customary and traditional alignment of the boundary between India and China. We believe that this alignment is based on well-established geographical principles confirmed by treaties and agreements, as well as historical usage and practice, well-known for centuries to both sides," the Defence Minister said. 'China Can't Lose An Inch Of Territory, India Responsible For Escalating Tension': Chinese Defence Minister Wei Fenghi To Rajnath Singh.

(The above story first appeared on LatestLY on Sep 15, 2020 05:43 PM IST. For more news and updates on politics, world, sports, entertainment and lifestyle, log on to our website latestly.com).