Pregnant Cow Dies During Treatment in Faridabad, 70 KG of Garbage Including Plastics And Glass Removed From Her Stomach

A pregnant cow that was rescued following an accident and abortion, died after four-five days in Haryana's Faridabad, said a veterinarian on Friday. 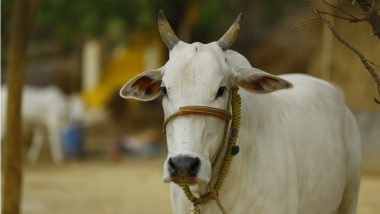 Faridabad, March 6: A pregnant cow that was rescued following an accident and abortion, died after four-five days in Haryana's Faridabad, said a veterinarian on Friday.

Speaking to ANI, veterinarian Atul Maurya said over 70 kgs of garbage was removed from the cow's body during the operation conducted by a team of three doctors.

"A pregnant cow was rescued after it met with an accident, it underwent abortion later. A 6-month baby cow was aborted, still, the animal was having blotting. We operated the animal and removed over 70 kgs of garbage from its body including plastic, glass and iron materials. However, we couldn't save it," he said.

"A team of three doctors operated the animal for four hours. Unfortunately, we could not save the animal and the cow died after 4-5 days," he added.

Maury urged the general public not to throw garbage in the open so that cows do not eat the garbage.