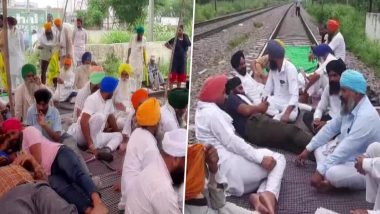 According to railway officials of Ferozepur division, as many as 50 trains have been cancelled, while 54 have either been diverted or short-terminated.

If govt doesn't hold talks with us by today evening, then we'll give Punjab Bandh call.We'll try to avoid imposing a bandh from tomorrow due to Rakhi: MS Rai,BKU-Doaba pic.twitter.com/Ca0eEAALRO

Scores of farmers had on Friday launched an agitation for an indefinite period to press the Punjab government to accept their demands related to pending dues of sugarcane and hike in cane prices. On Saturday, they refused to lift the blockade till their demands were met.

Emergency vehicles have, however, been allowed to ply, they added.

Protesters have blocked the Jalandhar-Phagwara stretch of the national highway near Dhanowali village of Jalandhar district.

The blockade affected traffic to and from Jalandhar, Amritsar and Pathankot, though the administration diverted traffic through some alternative routes.

They are demanding that the Punjab government raise the state assured price (SAP) of sugarcane and clear payment of arrears to the tune of Rs 200-250 crore.