Telangana MLC K Kavitha has slammed the Centre alleging that the government has sold the Public Sector Units (PSUs) in the country while also accusing it of implementing "anti-labourer laws". 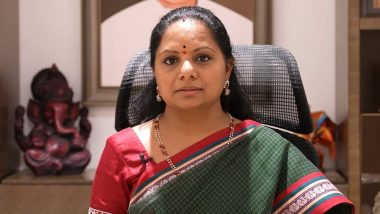 Warangal, June 1: Telangana MLC K Kavitha has slammed the Centre alleging that the government has sold the Public Sector Units (PSUs) in the country while also accusing it of implementing "anti-labourer laws".

Kavitha also alleged that the Narendra Modi government has "duped" the public and labourers with reforms that it has carried out in its eight years of tenure at the Centre. LPG Price Hike: Telangana Rashtra Samithi Leader K Kavitha Slams Centre Over Hike in Commercial LPG Price.

The remarks of the Telangana Rashtra Samithi (TRS) leader came while addressing a gathering in Kazipet on Tuesday. "The TRS government is fighting against such laws (reforms). Chief Minister K Chandrasekhar Rao was implementing schemes for the development of labourers and creating employment opportunities for the youth," she said.

Detailing the work done by the KCR government in Telangana, Kavitha said that the government has been supportive of the labourers and has taken up several measures for the benefit of the workers including allotting Rs 1,000 grant funds to the TSRTC per year, and regularizing the jobs of 25,000 employees working with the electricity department.

"On the contrary, the BJP government at the Centre is on privatise spree. It has failed to offer jobs though PM Modi had promised to provide two crore jobs each year. 16 lakh jobs are lying vacant with the Central government," Kavitha said.