High voltage political drama intensified in Maharashtra as rebel Shiv Sena leader and state cabinet minister Eknath Shinde on Wednesday claimed that he has the support of 46 MLAs, including six to seven Independent MLAs. 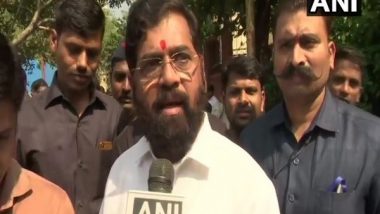 Mumbai, June 22: High voltage political drama intensified in Maharashtra as rebel Shiv Sena leader and state cabinet minister Eknath Shinde on Wednesday claimed that he has the support of 46 MLAs, including six to seven Independent MLAs.

"Right now we have 46 MLAs with us, including 6-7 Independent MLAs. This number will rise in the time to come. As of now we have neither received any proposal from BJP nor are we holding any talks with them," Shinde told ANI over the phone. Also Read | Uddhav Thackeray Address Highlights: Maharashtra CM Says ‘Will Resign As Chief Minister if Even One MLA Against Me, Ready to Quit As Shiv Sena Party Leader Too’.

Shinde said that the rebel MLAs are not in talks with the Shiv Sena or CM Uddhav Thackeray. "As far as the current political situation is concerned, I would say that we are Balasaheb Thackeray's Shiv Sainiks and will continue to be Shiv Sainiks. As of now, we are not holding any talks with Shiv Sena or the Chief Minister. We have not decided on the future course of action," added Shinde. Also Read | Maharashtra Political Crisis: Shiv Sena Asks All MLAs To Attend Legislature Party Meeting in Mumbai at 5 PM; Order 'Legally Invalid', Says Eknath Shinde.

Forty MLAs led by Shinde arrived at a luxury hotel in Guwahati in BJP-ruled Assam this morning. The revolt in the Shiv Sena has given rise to speculations that Shinde along with other MLAs might join the BJP in a bid to topple the Maha Vikas Aghadi (MVA) government.

The MLAs are now staying at Radisson Blu Hotel in the city. "A total of 40 MLAs are present here. We will carry Balasaheb Thackeray's Hindutva," said Shinde after arriving in Guwahati.

40 Maharashtra MLAs including 33 Shiv Sena and seven independent MLAs have lent their support to Shinde by signing a letter, said sources. These MLAs were received by BJP MLA Sushanta Borgohain and BJP MP Pallab Lochan Das at Guwahati airport.

Meanwhile, Shiv Sena issued a letter to party MLAs asking them to be present at a meeting to be held this evening. The meeting is scheduled at 5 pm in the evening.

Shiv Sena's Chief Whip, Sunil Prabhu issued a letter to all party MLAs, asking them to be present in an important meeting that will be held today evening. The letter stated that if anyone remains absent, it will be considered that the said MLA has decided to quit the party voluntarily.

The letter also warned that if any MLA remains absent from the meeting without proper reason and prior information, they should keep in mind that action will be initiated to cancel their membership as per constitutional provisions.

Amidst the crisis in the Maha Vikas Aghadi government, Chief Minister Uddhav Thackeray chaired a cabinet meeting today. Uddhav Thackeray who tested positive for COVID joined the meeting via video conferencing. State cabinet minister Aslam Shaikh said only the cabinet agenda was discussed in the meeting and not the current political scenario.

Asked about th speculations over Uddhav Thackeray's resignation as the CM, Shiv Sena MP Sanjay Raut said no decision will be made until the MLAs are back in Mumbai.

"I am going to Varsha Bungalow. I will meet Chief Minister but whatever has to be done will be decided by Maha Vikas Aghadi together. Unless the MLAs are back in Mumbai, no decision will be made," Raut told reporters.

Earlier today, a meeting of the Congress Legislature Party was held in Mumbai. The meeting was held at the residence of Congress Legislative Party (CLP) leader and Maharashtra Cabinet Minister Balasaheb Thorat. All India Congress Committees (AICC) observer Kamal Nath was also present at the meeting.

Following the meeting, Kamal Nath said, "41 out of 44 MLAs attended the meeting here while 3 are on the way. The politics BJP has started is of money and muscle power. It is against the constitution. I have seen this a lot. Unity will prevail in Shiv Sena under Udhhav Thackeray. I have talked to Chief Minister Uddhav Thackeray and he said that as of now there is no proposal to dissolve the Maharashtra Assembly."

Earlier today, Shiv Sena leader Sanjay Raut on Wednesday hinted at the dissolution of the State Legislative Assembly. "The ongoing political crisis in Maharashtra is heading to the dissolution of Vidhan Sabha," said Raut in a Twitter post.

Back-to-back meetings of Shiv Sena, Congress and Nationalist Congress Party (NCP) are taking place in Mumbai over the rapidly changing political developments in the state.

Maharashtra minister and NCP leader Chhagan Bhujbal however, ruled out midterm polls in the state. "Midterm elections? There have been no talks yet. What can I say?," Bhujbal said.

On the other hand, when Nationalist Congress Party (NCP) chief Sharad Pawar was asked about the crisis in MVA, he termed the turmoil "an internal matter of the Sena". Pawar also said he remains fully committed to the three-party government. He also ruled out any tie-up with the opposition BJP.

The developments came up after suspected cross-voting in Maharashtra Legislative Council (MLC) elections in which the Bharatiya Janata Party (BJP) bagged five seats, in a major blow to the MVA alliance government. NCP and Shiv Sena won two each while Congress was able to clinch one seat out of the total 10 seats in Legislative Council that went to the polls on Monday.

After the MLC elections, Shinde along with some other Shiv Sena MLAs was staying at Le Meridien hotel in Surat. A Shiv Sena delegation comprising Chief Minister Uddhav Thackeray's close aides Milind Narvekar and Ravindra Phatak had also met Shinde and other party legislators in Surat.

Alleging that efforts are being made to topple the MVA government, Shiv Sena MP Sanjay Raut on Tuesday had confirmed that some Shiv Sena MLAs and Eknath Shinde were currently "not reachable". He said that Shiv Sena MLAs were in Surat and they were not being allowed to leave.

Maharashtra BJP chief Chandrakant Patil, however, said that his party would "definitely consider" a proposal if it comes from Sinde to form an alternative government.

Amid the drama, Shinde took a veiled dig at Shiv Sena for joining hands with Congress and NCP to form the government in the state and tweeted, "We are Balasaheb's staunch Shiv Sainiks ... Balasaheb has taught us Hindutva. We have never and will never cheat for power regarding Balasaheb's thoughts and Dharmaveer Anand Dighe Saheb's teachings."

Shinde has also dropped "Shiv Sena" from his Twitter bio. He has been instrumental in strengthening the organisation in the Thane region and was made the Leader of the Opposition in the Maharashtra Legislative Assembly in 2014 after the Shiv Sena parted ways with the BJP. Shinde was appointed as a cabinet minister in the MVA government.

However, sources said Shinde has been feeling sidelined since the formation of the MVA government. His son Shrikant Shinde represents the Kalyan Lok Sabha seat.Amid these developments, Shiv Sena leaders met Deputy Speaker of Maharashtra Assembly Narhari Zirwal and handed over him a letter requesting to remove Eknath Shinde from the Legislative party leader's post and replace him with Ajay Chaudhary as Shiv Sena Legislative party leader.

Shiv Sena's Sanjay Raut has claimed the rebellion has been engineered by the BJP to topple the ruling MVA alliance a claim denied by the BJP. Maharashtra BJP chief Chandrakant Patil claimed that "technically" the state government is in "minority" as Eknath Shinde and other Shiv Sena MLAs have gone.He said that the BJP was presently in a "wait and watch" mode and added that there has not been any proposal regarding government formation neither from the BJP nor from Shinde.

"BJP got support from independents and small political parties for Rajya Sabha and MLC elections. As per our information, Eknath Shinde and 35 MLAs have gone. This means technically state government is in minority but practically it will take some time for the government to be in minority," he said.

"It's too early to say anything, we are currently waiting and keeping an eye on the situation. So far, there has not been any proposal regarding government formation neither from the BJP nor from Eknath Shinde but anything can happen in politics at any time," the BJP leader added.

There are a total of 288 members in the Maharashtra Legislative Assembly. So the halfway mark is 145 to form the government. With 106 MLAs, BJP is the largest party in the House. Shiv Sena has 55 MLAs, NCP 53, Congress 44 and Bahujan Vikas Aghadi (BVA) has three MLAs in the assembly. After the death of a Shiv Sena MLA, currently, 287 MLAs are there in the Assembly and 144 MLAs are now needed to form the government.

Before the rebellion, the Shivsena-led MVA government enjoyed the support of 169 MLAs, while the BJP-led Opposition camp had 113 MLAs besides, five other MLAs.The BJP and the Shiv Sena used to be allies until 2019 when after contesting the Maharashtra Assembly elections together both parted ways over the issue of the chief ministerial's post.

Following days of the political impasse and high-voltage drama, the Shiv Sena finally formed the government along with the Congress and the NCP, with Chief Minister Uddhav Thackeray heading the Maha Vikas Aghadi alliance government.