According Gujarat police, these deceased included male labourers and their family members, including children. 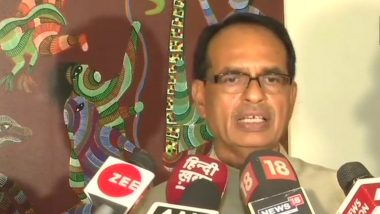 Bhopal, July 24: Madhya Pradesh Chief Minister Shivraj Singh Chouhan has announced a financial assistance of Rs 4 lakh each to the next kin of seven persons, who died in an explosion caused due to leakage of gas from an LPG cylinder in Gujarat's Ahmedabad.

The deceased persons belonged to Madhusudangarh in Guna district of Madhya Pradesh, the Chief Minister's Office (CMO) said in a statement. According Gujarat police, these deceased included male labourers and their family members, including children.

“Chief Minister Shivraj Singh Chouhan has expressed deep condolences on the death of seven workers of Madhusudangarh (MP's Guna district) due to gas leak in Ahmedabad. Chouhan has directed a financial assistance of Rs 4 lakh to the next of kin of the deceased and Rs 2 lakh to the injured besides free treatment to them,” the CMO said. Madhya Pradesh Governor Mangubhai C Patel also expressed grief over the death of workers. UP: Woman Dies While Clicking Selfie With Gun in Hardoi, Father Suspects Foul Play.

Praying for the departed souls and for strength to the bereaved families, Patel wished a speedy recovery to the injured, the governor's office said. The incident had taken place on the outskirts of Ahmedabad on Tuesday night (July 20), but the victims died over the last couple of days during treatment, Gujarat police have said.