Activists of the National Students' Union of India on Monday staged a protest here against the Centre over the Pegasus snooping row. 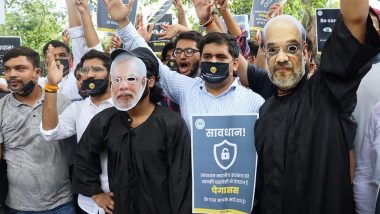 New Delhi, August 2: Activists of the National Students' Union of India on Monday staged a protest here against the Centre over the Pegasus snooping row. An international media consortium had recently reported that more than 300 verified mobile phone numbers, including of two serving ministers, over 40 journalists, three opposition leaders and one sitting judge besides scores of business persons and activists in India were targeted for hacking through the spyware.

The government has maintained that the the allegations are aimed at maligning Indian democracy. The protest took place outside the Shastri Bhavan here. Pegasus Spyware Row: BJP Questions Rahul Gandhi’s ‘Long Silence’ on Software Being Implanted on His Phone.

An NSUI statement said, "The whole row over the Israeli agency Pegasus was enacted showing how the Indian government opened doors for a foreign agency endangering the safety and security of the country". Hundreds of youngsters participated in the protest, the statement said.

"This is the most embarrassing act by any government in the independent history of our country. This isn't just another scam, but also a pre-planned attack on all four pillars of our democracy.

"The Narendra Modi government has targeted the legislature, the executive and even our media and our judiciary. This is crossing all the boundaries of shamelessness as it has moved from 'controlling the institutions' to 'spying on them',” the statement quoting NSUI national President Neeraj Kundan said.