Hitting out at former Congress president Rahul Gandhi, the BJP on Wednesday wondered if a "weapon" (Pegasus) had been implanted on his phone then why did he not speak about it for so many days. 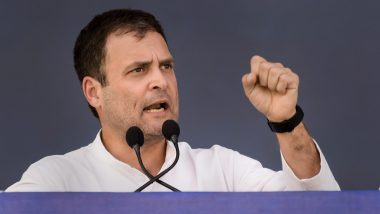 New Delhi, July 29: Hitting out at former Congress president Rahul Gandhi, the BJP on Wednesday wondered if a "weapon" (Pegasus) had been implanted on his phone then why did he not speak about it for so many days. Bharatiya Janata Party (BJP) spokesperson, Sambit Patra said: "Rahul Gandhi is saying that a weapon has been implanted on his mobile phone. Why did he not speak for so many days and kept mum? Has he filed any FIR on this issue?"

"People of the country have elected them and sent them to Parliament to do constructive debate. The Congress party is least interested in letting Parliament to discuss and debate the important issue of Corona, it only looks for baseless and redundant issues and creates obstacles to not let Parliament function," he said.

Taking a dig at Congress leader's claims of united opposition, Patra said: "Rahul Gandhi is saying that the Opposition is united. Before the 2019 general elections a similar photo had some light, but everyone knows what happened to the so-called unity of the imaginary 'Mahaghatbandhan' (grand alliance)."

He claimed that the leaders and parties who formed the imaginary 'Mahaghatbandhan' are the ones who just think about their families and they have just one ambition, one goal and that is to save their own families.

"Do you think that Akhilesh Yadav, Rahul Gandhi and Priyanka Gandhi want to take India to its golden era? Absolutely not. It's a myth, a big lie. All these leaders have just one ambition and that is to settle their children in politics. And on the other hand we have our Prime Minister Narendra Modi ji whose only mission is to take our nation forward," the BJP leader said.

He alleged that it is because of the highly callous and irresponsible behaviour of the Kerala government that today more than 50 per cent of the Corona cases are being reported from Kerala.

"Today 22,000 Corona cases have been reported from Kerala and it looks like a new wave of the Corona pandemic has already started in Kerala," he said. He claimed that yesterday the Health Minister of Rajasthan Raghu Sharma celebrated his birthday in an indoor stadium where a large number of people gathered.

"All protocols related to the Corona pandemic were grossly violated. Schools and colleges of Rajasthan are closed, but the Health Minister of Rajasthan celebrated his birthday by putting the lives of hundreds of people at risk," Patra added.

(The above story first appeared on LatestLY on Jul 29, 2021 08:32 AM IST. For more news and updates on politics, world, sports, entertainment and lifestyle, log on to our website latestly.com).