In the light of shortage of medical oxygen in the country due to surging COVID-19 cases, Chairman and CEO Railway Board Suneet Sharma on Thursday said that the Indian Railways is ready to transport Liquid Medical Oxygen (LMO) anywhere to save every life. 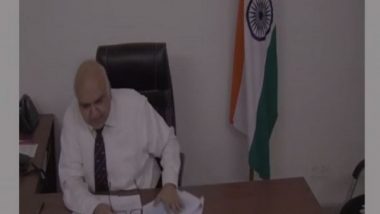 New Delhi, April 23: In the light of shortage of medical oxygen in the country due to surging COVID-19 cases, Chairman and CEO Railway Board Suneet Sharma on Thursday said that the Indian Railways is ready to transport Liquid Medical Oxygen (LMO) anywhere to save every life.

In an online media interaction, the CRB said the Indian Railways continues to serve the nation by transporting essential commodities and driving innovation to ensure the well-being of all citizens. Indian Railways to Run 'Oxygen Express' to Meet High Demand Amid Surge in COVID-19 Cases.

He informed that the first "Oxygen Express" with Liquid Medical Oxygen tankers is already departed from Visakhapatnam last night and going to Nasik via Nagpur. The Oxygen Tankers are being transported through the Ro-Ro service of Indian Railways.

Another 'Oxygen Express' train started its journey from Lucknow to Bokaro on April 22. This train is also coming back with Oxygen Tankers, he added. The CRB also informed that further Oxygen Express Trains are being provided for Andhra Pradesh, Uttar Pradesh, Madhya Pradesh and Delhi. The Railways has already received a request from these states and working on it, he said.

However, the journey required recce of the entire route with a new size of special tankers loaded in. It is also noted that to facilitate the loading/unloading of tankers in/from flat wagons, a ramp is required. Also, due to restrictions of the height of Road Over Bridges (ROBs) and Over Head Equipment (OHE) at certain locations, the model of road tanker T 1618 with a height of 3320 mm was found feasible to be placed on flat wagons (DBKM) with the height of 1290 mm.

In addition, Green Corridor was created to non stop running of these freight trains. This is the top priority of Railway, the CRB said. On the issue of isolation coaches, which are prepared by Indian Railways, the Chairman, Railway Board said that 3,816 coaches are available for COVID-19 isolation.

According to the data, 1,514 specials trains average per day being operated by the Indian Railways. In addition, 5,387 suburban services per day also being operated. 28 special trains are being operated as clones of highly patronised trains with high patronage.

Moreover, 947 passenger services are being operated and overall 70 per cent train services have been restored. But, at the same time, more than 93,000 Railway staff members across the country are suffering from COVID-19 and many have lost their lives.

But, despite this, during this tough time, the Indian Railways is running and doing things non-stop for the last 13 months with the motto of 'The Nation Come First and We Shall Win.'