Food and Consumer Affairs Minister Piyush Goyal on Friday asserted that restaurants cannot add 'service charge' to the food bills, though customers at their discretion can give "tips" separately. 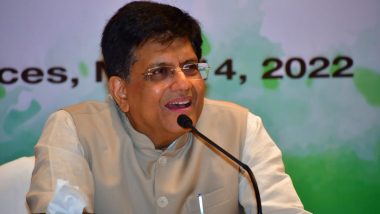 New Delhi, June 3: Food and Consumer Affairs Minister Piyush Goyal on Friday asserted that restaurants cannot add 'service charge' to the food bills, though customers at their discretion can give "tips" separately.

Goyal said if restaurant owners want to pay higher salaries to their employees, they are free to increase rates on their food menu as there are no price controls in the country.

He also dismissed contentions of restaurant owners that they would incur losses if the service charge is done away with.

On Thursday, the consumer affairs ministry said the government will soon come out with a legal framework to stop restaurants from imposing service charges on customers as the practice is "unfair".

"You (restaurants) cannot add service charge in a bill...If you feel that some more benefits are to be given to employees, it cannot be forced on customers. You can raise prices to give hikes," Goyal said in reply to a question on the issue of service charges by restaurants. World Milk Day 2022: Different Types of Milk and Their Benefits.

The minister said the government was getting complaints from consumers regarding the service charge being imposed by restaurants.

"You are free to give raises to employees and increase rates. But if there is a hidden cost, how the people will know the real price," he said.

Goyal also added that people leave tips if they find services to their satisfaction, and they can continue doing so.

On Thursday, the Department of Consumer Affairs held a meeting with representatives of associations of restaurants and consumers.

After the meeting, Consumer Affairs Secretary Rohit Kumar Singh said that the government is of the view that the practice of imposing service charges adversely affects the rights of the consumers and is an "unfair trade practice" as well.

"We will soon work on a legal framework because there were guidelines of 2017, which they have not enforced. The guidelines are not generally legally enforceable," he had said.

The secretary also informed that a framework in this regard will be issued shortly that will be legally binding on restaurants.

An official release had said that during the meeting, major issues raised by the consumers on the National Consumer Helpline of the department were discussed.

Those were related to compulsory levy of service charge, adding the charge by default without the express consent of the consumer, suppressing that such charge is optional and voluntary, and embarrassing consumers if they resist paying such charge.