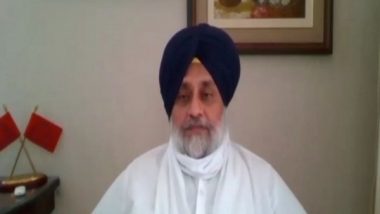 New Delhi, June 5: With Punjab slated to go to the polls early next year, Shiromani Akali Dal chief Sukhbir Singh Badal has said that his party is open for pre-poll alliance with parties other than Congress, Bharatiya Janata Party and Aam Aadmi Party. Badal, whose party was part of ruling NDA at the Centre before pulling out over the new farm laws last year, categorically ruled out the possibility of aligning with the BJP.

"We are open to alliances with other parties minus Congress, BJP and AAP. We cannot align with these parties. We will form alliances and we are open to others. No chance to go with BJP at all," Badal told ANI.

Badal's remarks have come at a time when the political temperature is rising in Punjab ahead of assembly elections and the opposition has mounted a sharp attack on the Congress government in the state over allegations of "vaccine profiteering". Mayawati Slams Punjab Govt Over Profiteering From COVID-19 Vaccines by Selling to Private Hospitals at Premium.

The SAD leader alleged that Chief Minister Capt Amarinder Singh "is running to Delhi to save his chair" instead of focusing on the COVID-19 situation.

Badal said "vaccine profiteering" will be a major issue in the elections.

"This is one of the major issues as it touches thousands of lives. In Punjab, more than 15,000 lives have been lost to COVID-19 as per the official figures. The unofficial figure is higher. Instead of tackling the COVID situation, the Chief Minister is running to Delhi to save the chair. I have not seen him giving any statement on how to deal with COVID in the past 20 days. He is not visible in Punjab. He never moved out of his plush house and visited villages or towns," Badal said.

Asked about aspirations of AAP and its leader Arvind Kejriwal in Punjab, Badal said "Kejriwal is a PR man". "He will make one mohalla clinic and make a video to show that he has made thousands of them but actually, it is one. He renovates one school and shows as if he has changed the whole school system. People have realised that he is a fraud," Badal said.

Former Punjab Deputy Chief Minister said Kejriwal "surrendered before the Centre" when the COVID situation went out of hand in the national capital.

"A Chief Minister who can't manage the state and can't fight a war during an emergency doesn't deserve to be chief minister," Badal said.

Responding to allegations of a tacit understanding between SAD and Punjab Chief Minister Captain Amarinder Singh, Badal said "few in Congress are fuelling these rumours as they know that they will be wiped out (in upcoming polls)".

"All MLAs and ministers have been looting the state. They have been washing their dirty linen in public. They can't get away with it," the Ferozepur MP said.

Badal said people for looking for change and earlier the Congress government goes away the better it is for people of the state.