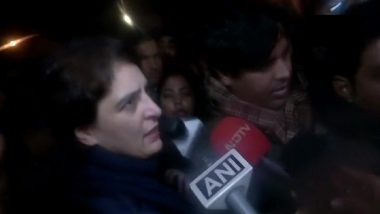 Former state minister Satyadev Tripathi and former MLC Siraj Mehandi who were expelled from the party by the Uttar Pradesh Congress Disciplinary Committee in 2019 for 'indulging in anti-party activities' said under Priyanka Gandhi Vadra's leadership, the party will suffer the same fate it did in Amethi in the Lok Sabha elections of May 2019. Also Read | COVID-19 Vaccination Drive Crosses 75 Crore-Mark In India; WHO Congratulates The Country.

"The Congress party does not value its workers. I worked for the party non-stop from 1986 to November 14, 2019, and was expelled without any proper reason. Since then no one has answered any communication from our end. We meet people on the ground and get reports. Party does not value its workers and has no connection with them," said Tripathi. Also Read | Realme 8i Smartphone To Go on Sale Tomorrow in India; Offers, Prices & Specifications.

The reaction came after former Union minister Salman Khurshid on Monday said Priyanka Gandhi Vadra will be the face of the party in the state elections.

Tripathi said the Congress general secretary, who was the 'face' of her brother Rahul Gandhi's election campaign in Amethi in 2019 was unable to take Congress towards victory because she lost touch with the ground workers of the party.

"If things continued in the Congress the way they were in 2019, the party will suffer the same fate," he said. Meanwhile, former MLC Siraj Mehandi went a step further and said Congress leadership is 'arrogant' and does not consider party leaders' opinions about party related matters.

"Congress leadership is keeping an arrogant stance. It is a sad affair that Priyanka Gandhi comes to UP for two days like she is going on a picnic. Nobody wants to meet the workers. When Rajeev Gandhi was Prime Minister, he used to meet at least a thousand people in a day. It is difficult to meet Sonia ji, and by chance, if you meet her, she says meet Rahul. Rahul says to meet Priyanka and Priyanka does not have time to meet people. The biggest problem in Congress today is that high command's touch with the ground workers and does not listen to anyone else," said Mehandi.

The former MLC further attacking the Congress state in charge said that she went to Raebareli, which was referred to as the 'family bastion' of Gandhi family, and was not able to take party towards victory in the Zila Parishad election.

Talking about Congress rebel Aditi Singh, Mehandi said the issues between her and the party would have been sorted if Priyanka Gandhi paid her a visit and listened to her grievances.

"Recently Sushmita Dev left Congress. We talked to her and her core issue with the party was that there was no communication with the high command. She is such a senior leader. If she's having problems in communication, imagine the plight of the common workers," he added.

In the 2017 Assembly elections, the BJP won a landslide victory winning 312 Assembly seats. The party secured a 39.67 per cent vote share in the elections for 403-member Assembly. Samajwadi Party (SP) bagged 47 seats, BSP won 19 while Congress could manage to win only seven seats. Congress was left red-faced as it failed miserably.