The 35 constituencies are spread across four districts. Among these, six are in Malda, eleven in Birbhum, eleven in Murshidabad and seven in Kolkata. 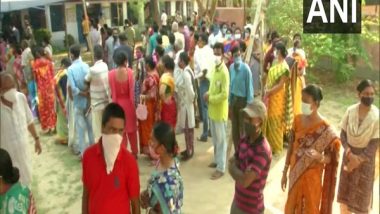 Voters at a polling booth in Birbhum on Thursday. [Photo/ANI]

Kolkata, April 29: An approximate 56.28 per cent voter turnout has been recorded till 2:30 pm as the eighth and the final phase of West Bengal assembly elections is underway on Thursday, according to the Election Commission (EC).

Voting for the the last phase of West Bengal assembly elections began at 7 am and will continue till 6:30 am. TMC supporters gheraoed car of BJP candidate Kalyan Chaubey in Maniktala, North Kolkata.

Kalyan Chaubey said, "Our polling agent was sitting inside when a 50-yr-old woman came to vote instead of a 31-yr-old woman. When the agent objected she was scolded. This is hooliganism of TMC." West Bengal Assembly Elections 2021: Voter Turnout of 16.04% Recorded in First 2 Hours in Last Phase.

Over 84.77 lakh electorates, including 41.21 lakh women and 158 third gender persons, would be casting their votes at as many as 11,860 polling stations in phase VIII. The ruling All India Trinamool Congress (AITC) and BJP are contesting on all 35 seats. Congress, the Left parties and the Indian Secular Front (ISF) have made a coalition and are contesting under the banner of Sanyukta Morcha.

Out of the 35 seats in this round, Congress has 19 in its share, CPI(M) has 10, Revolutionary Socialist Party (RSP) has one, All India Forward Bloc (AIFB) has three and ISF has four seats. Bahujan Samaj Party (BSP) is also trying its luck and has fielded 24 candidates.

The dominance of the Muslim population in the districts of Murshidabad and Malda sets the political dynamics in this region. Traditionally, these districts are considered as the Congress bastion.

Development, unemployment and migration remain the core issues in these districts.The BJP is targeting the incumbent TMC over 'tolabaazi' (extortion), 'cut money' and syndicate raj and appeasement politics. Plus, an air of anti-incumbency can also be felt against the ruling TMC government in the state.

However, the Mamata Banerjee-led TMC is banking upon its welfare schemes like "Duare Sarkar", "Swastho Sathi" and "Kanyashree". West Bengal is undergoing an eight-phased Assembly election. The counting of votes will take place on May 2.