Not only refined soybean oil, even sunflower oil from Nepal is entering India at zero duty and is being sold in South India, creating highly unfair competition, it said. 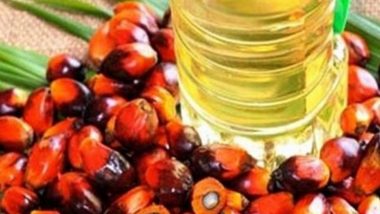 New Delhi, June 7: Edible oil trade body SEA on Monday demanded that the government take immediate steps to curb excess import of refined soybean oil from Nepal at zero duty, flouting rules of origins. Not only refined soybean oil, even sunflower oil from Nepal is entering India at zero duty and is being sold in South India, creating highly unfair competition, it said.

Solvent Extractors Association of India (SEA), in a statement, said it has received complaints from its members that traders are purchasing finished goods from Nepal and are just replacing the stickers and selling it under their brand at absurdly low prices. Edible Oil Prices in India Highest in Over a Decade, Centre Tells Stakeholders To Take Steps To Soften Rates.

One of the SEA members complained, "In Tamil Nadu, Erode has become a big hub for Nepalese refined sunflower oil and slowly Chennai one too. It is not possible to compete with them at such prices and will eventually lead to closure of small and medium size refiners in the area."

And the Nepal government and its industry body, as per the media reports, have said that the certificate of origin issued for export of refined soybean oil to India was as per the 20 per cent value-addition norms under the Indo-Nepal Treaty, he said.

"Massive influx of soybean oil from Nepal into India flouting rules of origins, (is) seriously hurting domestic refiners, farmers and (leading to) loss of revenue to the government," he said, adding that the government needs to find a solution to this problem.

To check excess imports from Nepal, SEA suggested that the government should canalise imports through some PSU like NAFED and distribute the oil to the vulnerable section of society through Public Distribution System.

Prices of edible oils have skyrocketed in the world and poor consumers in India are suffering. Reducing import duty may not help much as it gets negated by increase in values internationally. This move may also not be construed as 'farmer friendly 'with Kharif oilseed planting round the corner, it said.

Without lowering overall import duty for the country, the government would be able to get zero duty oil from Nepal in a much more regulated manner which can provide solace to the underprivileged, it said.

Moreover, it would also help the Indian refining industry in Eastern and Northern India which is facing the brunt of zero duty imports flooding these markets from Nepal.

Further to check excessive import, the government should fix the quota for import of refined oils from Nepal and distribute month-wise /region-wise to have minimum impact on domestic refinery industry, SEA added.

Domestic retail edible oil prices have shot up over 60 per cent in the last one year. And the government recently said the abnormal increase in rates was in line with the global market and the prices are expected to cool down soon.

India meets 60 per cent of its cooking oil demand through imports.