Bhumi took to her Instagram account and shared a series of BTS pictures from their 2019 hit movie Sonchiriya. 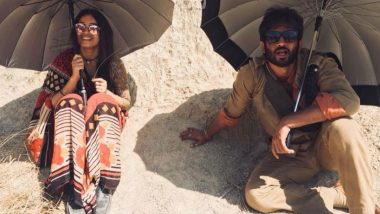 As today marks the first death anniversary of Bollywood's powerhouse Sushant Singh Rajput, his Sonchiriya co-star Bhumi Pednekar shared a heartfelt tribute for him on social media. Bhumi took to her Instagram account and shared a series of BTS pictures from their 2019 hit movie Sonchiriya. The first shot features the late actor who can be seen smiling while playing with a kid and posing for the camera. The second shot is a monochromatic candid picture of Sushant. While the third one features Bhumi with her late co-star posing for the camera. Sushant Singh Rajput Death Anniversary: Bhumi Pednekar, Pulkit Samrat, Amit Sadh Remember The Actor.

"Miss you, your questions and everything we spoke about. From the stars to the things unknown, you showed me the world like I had never seen it before. I hope you've found your peace my curious sweet SSR...Om Shanti #Forever #Ssr #Peace #neutronstar," she captioned the post with heart emoticons. 'Sonchiriya' starred Sushant, Bhumi, Manoj Bajpayee, Ranvir Shorey and Ashutosh Rana in the lead roles. The film, which presented a rooted tale set in Chambal, was released in March 2019 and received positive reviews from critics. However, it didn't perform well at the box office. Ankita Lokhande Is Back on Social Media Ahead of Sushant Singh Rajput’s First Death Anniversary (View Post).

Sushant Singh Rajput, who was fondly known for portraying diverse roles with perfection, died by alleged suicide in his apartment on June 14, 2020. It's been a year, but the nation still continues to feel the void left by the late actor. His passing away triggered a massive controversy, with his family alleging foul play and levelling several allegations on his girlfriend and actor Rhea Chakraborty. Currently, the Central Bureau of Investigation (CBI) is probing the matter surrounding his death.

Sushant, who began his acting career in 2008 with the TV show 'Kis Desh Mein Hai Meraa Dil', became a household name when he grabbed the lead role in Zee TV's 'Pavitra Rishta' opposite Ankita Lokhande. Soon after he reached the peak of his career, he left the television industry to test his luck in the Hindi film industry. In 2013, he made his Bollywood debut with 'Kai Po Che' and since then he never looked back.

The actor has been a part of several hit films including 'Detective Byomkesh Bakshy!', 'M.S. Dhoni: The Untold Story', 'Kedarnath' and 'PK'. He played the lead role in the blockbuster film 'Chhichhore', co-starring Shraddha Kapoor, which bagged major accolades including a National Award for the best Hindi movie. His last movie, 'Dil Bechara', was released digitally a month after his death.