A large number of people gathered here on Thursday to hail the Centre's decision of declaring 'Sikhs for Justice' as an unlawful association under provision 3(1) of the Unlawful Activities Prevention Act 1967. 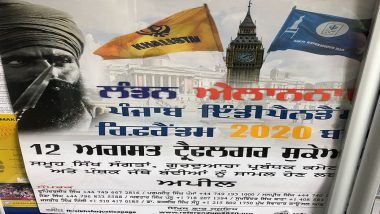 Ludhiana, July 11: A large number of people gathered here on Thursday to hail the Centre's decision of declaring 'Sikhs for Justice' as an unlawful association under provision 3(1) of the Unlawful Activities Prevention Act 1967. The residents chanted slogans against Khalistan and 'Sikhs for Justice', a pro-Khalistan organisation. They also cherished India's ban for its anti-national activities.

The 'Sikh for Justice' organisation has been carrying out anti-India operations from Canada and the United States. It has allegedly been operating with the funds being provided to by Pakistan's intelligence agency ISI (Inter-services Intelligence). One local said, "Even during one and half decade of militancy in Punjab, these people tried to stoke the wave of Khalistan. India has taken a strong step in the direction of curbing terrorism by banning this organisation. We appreciate the central government for acting against those who are constantly hatching anti-Punjab and anti-India plans." Sikhs For Justice Banned by Indian Government For Pushing 'Referendum 2020'; Captain Amarinder Singh Welcomes Decision.

"This is a terrorist organisation. A handful of people are behind this, who are constantly trying to destabilise the atmosphere of the country. We will never let them succeed," another local said. In November, Pakistan had even allowed the organisation to open its office Lahore.

The SFJ had even declared then that Kartarpur Corridor was a bridge to Khalistan, the separate homeland they have been seeking in the sovereign territory of India. However, after tremendous international pressure, Pakistan disallowed foreign-based pro-Khalistani Sikhs from commencing registration for 'Referendum 2020' in Pakistan.

On Thursday, the legal advisor of SFJ, Gurpatwant Singh Pannun, while reacting on the ban by the Government of India, said that they will hoist Khalistan flags outside the Indian Consulates in the United States, Canada, the United Kingdom and Europe on August 15 while India observes its 73rd Independence Day.