She will be seen playing the role of the brave social worker Sunderben Jetha Madharparya in the upcoming Indian Hindi-language war drama action film Bhuj: The Pride of India, directed, co-produced, and written by Abhishek Dudhaiya. 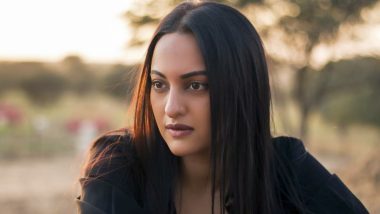 Amid the raging second wave of the COVID-19, Bollywood actor Sonakshi Sinha on Thursday shared a photo of her on social media, telling people about the importance of wearing a mask in a quirky manner. The Happy Phirr Bhag Jayegi actor took to her Instagram handle and posted a photo of her along with the caption "My "bola tha mask pehne rakho, ab dekho kya ho gaya" look."

In the photo, Sonakshi can be seen outdoors, posing for the camera while looking at a distance with no expression on her face. Sonakshi Sinha on Social Media Trolling: I Have Reached a Point Where It Doesn’t Affect Me.

The post from the actor received more than 84 thousand likes within a couple of hours of it being shared. Sonakshi had earlier also shared a glammed-up photo of her dressed in a sparkling blush pink attire, and urged everyone to stay at home due to the second wave of COVID. The second wave of coronavirus has infected a lot of people and the number of COVID-19 positive cases has been rapidly rising. In Bollywood, an array of celebrities have got infected within a span of a few weeks. Sonakshi Sinha to Play a Cop in the Upcoming Series on Amazon Prime Video (First Look Out).

She will also be seen playing the role of the brave social worker Sunderben Jetha Madharparya in the upcoming Indian Hindi-language war drama action film Bhuj: The Pride of India, directed, co-produced, and written by Abhishek Dudhaiya. She also recently announced her character Bulbul from her upcoming Netflix film titled Bulbul Tarang.