The Cricket Australia board on Thursday confirmed that the Australian men's team will play a five-match T20 International series in Bangladesh next month. 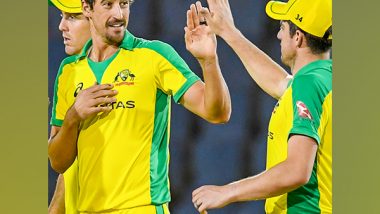 Canberra [Australia], July 22 (ANI): The Cricket Australia board on Thursday confirmed that the Australian men's team will play a five-match T20 International series in Bangladesh next month.

All matches will be played at the Sher-e-Bangla National Cricket Stadium in Dhaka from August 3 to August 9, as per the CA release.

Nick Hockley, Cricket Australia's CEO, said: "We would like to thank our friends at the Bangladesh Cricket Board for developing a detailed bio-security plan to keep players, staff and match officials safe.

"Both boards have worked extremely hard to do all we can to ensure the safety and wellbeing of everyone involved in the tour. We are looking forward to a competitive and entertaining series in Dhaka as both teams continue their preparations for the ICC Men's T20 World Cup later this year."

The team is currently playing a limited-overs series against the West Indies. Having lost the T20I series, Mitchell Starc's fierce bowling in the first ODI handed Australia a dominant win against West Indies on Tuesday night at the Kensington Oval Barbados.

The left-arm pacer took 5-48 while new-ball partner Josh Hazlewood had figures of 3-11 as the home team fell for 123, well short of their revised target of 257 for victory off 49 overs.

For West Indies, captain Kieron Pollard, who top-scored with 56 off 57 balls, and Hayden Walsh Jr (20) were the only players to reach 20. Pollard, who hit five fours and three sixes, had a 68-run, seventh-wicket partnership with Alzarri Joseph (17) to hold the innings together. But in the end it wasn't enough. (ANI)