Stefanos Tsitsipas qualifies for the semifinal of the Australian Open 2023 after defeating Jiri Lehecka 6-3, 7-6(2), 6-4. The Greek tennis star will face Karen Khachanov of Russia for a place in the final. 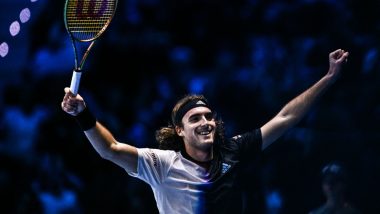 In the two hours and 17 minutes of play against Lehecka, Tsitsipas saved all eight break points he faced, routinely generating accurate and potent serves to get out of tough situations. The World No. 4 rode solitary breaks in the first and third sets, and a brilliant tie-break performance in the second to go past the finish line.

The win on Tuesday extended his unbeaten run across events this year to 9 matches and will also see him play his fourth semi-final at Melbourne Park. Sania Mirza, Rohan Bopanna Through to Mixed Doubles Semifinal at Australian Open 2023 After Getting Walkover in Quarterfinal.

"It felt different this time from any other match [this week], but the most important thing is that at the end I found a solution. It was a very difficult three-setter, one of the most difficult ones that I had so far in the competition. I think Jiri had a very good tournament. He is someone who started playing well recently and I wish him the best in the future because he is a great player," ATP.com quoted Tsitsipas saying during an on-court interview.

"I had to deal with the groundstrokes that were coming off the racquet from the other side of the court much heavier, much deeper. So that was a task in which I had to really put my heart out there and give it my best," added Tsitsipas.

"I know the [second-set] tie-break became a very crucial tie-break [for] who was going to get back into the match. The way I saw it, that was my opportunity to really take a massive lead there, and I'm very happy with the way I closed the second set," he added.

In another last-eight clash, Karen Khachanov of Russia advanced to his second consecutive Grand Slam semi-final after American Sebastian Korda retired in the third set with a right wrist injury.

The 18th-seeded Russian was leading 7-6(5), 6-3, 3-0, having won seven straight games, when the American took a medical timeout and retired shortly after. (ANI)