La Liga 2019-20: Casemiro Credits Karim Benzema for His Goal During Clash Against Espanyol

Real Madrid now have 71 points with a two-point lead over Barcelona. Real Madrid manager Zinedine Zidane also expressed elation over the win and congratulated the players. 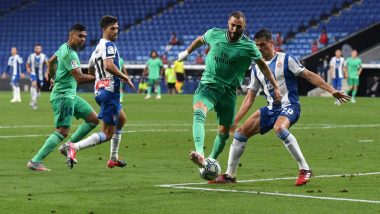 Barcelona, June 29: Real Madrid's Casemiro is all praise for his teammate Karim Benzema whom he credited for his stunning goal during the La Liga match against Espanyol.

In the 45+1st minute during clash against Espanyol, Karim Benzema's brilliant back-heeled assist to Casemiro lead to a goal. This was the only goal scored in the match and the victory moved Real Madrid to the top of the league. Espanyol 0–1 Real Madrid, La Liga 2019–20 Match Result: Casemiro Strike Sends Los Blancos Two Points Clear at the Top.

Real Madrid now have 71 points with a two-point lead over Barcelona. Real Madrid manager Zinedine Zidane also expressed elation over the win and congratulated the players.

"I want to congratulate the players. The effort they put in was incredible. We played against the bottom table team but you could not tell. They gave everything. It was a complicated match, but here we are, on top, fighting. We know that this isn't the end. We have to keep going. We have six finals left. For now I am happy with the match. Three points and now we have to rest up," Zidane said.