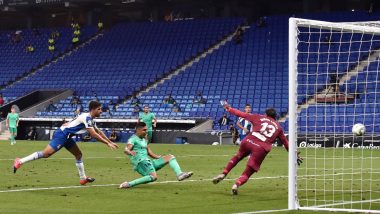 Madrid, June 29: Relegation seems inevitable for Espanyol after their third straight loss in La Liga, losing 0-1 to Real Madrid at home in their latest encounter.

With six rounds of matches to go, Espanyol are rooted to the bottom of the table and are now ten points from safety, reports Xinhua news agency.

The Barcelona-based club fired head coach Abelardo following a 1-0 defeat to Real Betis in the previous round, and newly-appointed Francisco Rufete was unable to halt the tide in his first match in charge on Sunday. AC Milan 2–0 AS Roma, Serie A 2019–20 Match Result: Ante Rebic Scores in Second Half to Break Deadlock.

The sole goal of the game came in the last minute of the first half, when Casemiro slotted home Karim Benzema's sensational backheel pass.

Chinese forward Wu Lei had chance to equalize for Espanyol four minutes after the restart, but his effort was saved by Thibaut Courtois, and neither side was able to produce a goal in the remaining minutes.

The win sees Real Madrid sit top of the table with 71 points, two points ahead of rivals Barcelona, who were held to a 2-2 draw by Celta Vigo on Saturday.

(The above story first appeared on LatestLY on Jun 29, 2020 09:32 AM IST. For more news and updates on politics, world, sports, entertainment and lifestyle, log on to our website latestly.com).