World number one Novak Djokovic will lock horns with defending champion Rafael Nadal in the semi-finals of the ongoing French Open on Friday. 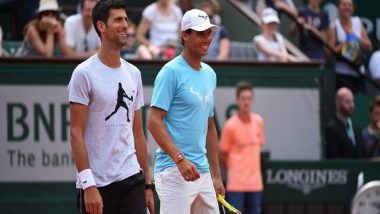 Paris, June 10: World number one Novak Djokovic will lock horns with defending champion Rafael Nadal in the semi-finals of the ongoing French Open on Friday.

The Serbian tennis player started off well as he won the first two sets quite easily but Berrettini came back in the third set. French Open 2021: Defending Champion Rafael Nadal Beats Diego Schwartzman to Enter into Semifinals.

However, Djokovic made the most of every opportunity converting four of nine breakpoints and saved all three break points in the fourth set to register a win. As a result, it took more than three hours to overcome his ninth-seeded opponent.

Djokovic and Nadal will lock horns for the 58th time and it will be their ninth face-off in Paris.

The 35-year old was at his prime best in the first set, and he dropped just three games, not giving his Argentine opponent any chance, and as a result, the Spaniard won the first set 6-3.

In the second set, Schwartzman took a 3-0 lead, but Nadal showed his temperament as he bounced back strongly and he brought the scoreline level to 3-3.

However, the Argentine Schwartzman managed to hold his own, and in the end, he won the second set 6-4.

The third set between Nadal and the Argentine saw back and forth action and at one stage it was tied at 4-4.

In the end, the Spaniard managed to hold his ground and he won the set 6-4, and he just needed to win one more set to qualify into the semifinals.

Carrying on with his winning momentum, Nadal did not let up and he went on to win the match.