Get latest articles and stories on Sports at LatestLY. Australia batter Travis Head has tested positive for COVID-19 and has been ruled out of the 4th Ashes Test at Sydney Cricket Ground (SCG). 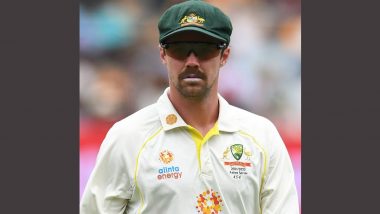 Melbourne, December 31: Australia batter Travis Head has tested positive for COVID-19 and has been ruled out of the 4th Ashes Test at Sydney Cricket Ground (SCG). Head had tested positive on Friday from a routine PCR test becoming the first player in either squad to be affected.

"Unfortunately, Travis returned a positive Covid-19 result earlier today. Thankfully, he is asymptomatic at this stage. We anticipate that he will be available to play in the fifth Vodafone men's Ashes Test in Hobart," he added. Travis Head Tests Positive for COVID-19, Mitchell Marsh, Nic Maddinson and Josh Inglis Join Team Australia Ahead of Fourth Ashes Test.

Mitchell Marsh, Nic Maddinson and Josh Inglis have all been called up to Australia's squad as replacements. Earlier on Thursday, it was confirmed that England coach Chris Silverwood would also be absent from the Sydney Test, after the COVID-19 outbreak in the touring team's camp grew to seven.

Silverwood awoke on Thursday to the news that he had been identified as close contact, after a family member in the touring party contracted the virus.

Following this, ICC match referee David Boon was tested positive for COVID-19 and was replaced by Steve Bernard, who is based in New South Wales. Australia has already retained the Ashes after gaining an unassailable 3-0 lead in the five-match series. The fourth Test will begin on January 5.