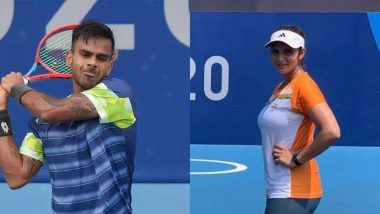 Tokyo, Jul 27 (PTI): The Indian tennis team's campaign at the Tokyo Olympics officially ended on Tuesday as Sania Mirza and Sumit Nagal could not make the cut for the mixed doubles event due to their low combined ranking of 153.

The entries were to be finalised on Tuesday morning and the cut was expected to be between 50-60. The Indians did not even have faint hopes of getting into the easiest of tennis events at the Games. Sania Mirza, Ankita Raina Suffer Shock Exit From Tokyo Olympics 2020 In First Round.

Only 16 teams play the mixed doubles event and thus winning just two matches can get a team in the medal round. Nagal was blown away by Daniil Medvedev in the men's singles competition, while the women's doubles pair of Sania Mirza and Ankita Raina lost its opener from a winning position.