With this loss, India's hopes of winning big at the competition are crushed. Earlier today, Indian shuttler Lakshya Sen lost to Chou Tien-chen of Chinese Taipei in hard-fought three games in the quarterfinal match of the Indonesia Masters 2022 which lasted for one hour and two minutes. 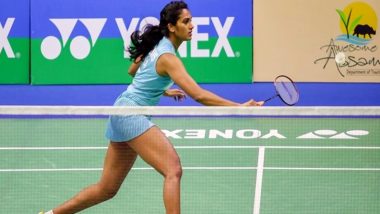 Jakarta [Indonesia], June 10: Two-time Olympic medalist PV Sindhu crashed out of the ongoing Indonesia Masters 2022 after suffering a defeat to Ratchanok Intanon of Thailand in the quarter-finals of the women's singles category at Jakarta on Friday. Playing on court 1, Sindhu lost the match to her opponent by a margin of 21-12, 21-10. The Indian did not look at her best, as her Thai counterpart sealed the match and qualified for the semi-finals after winning two straight games convincingly. It took Intanon 33 minutes to eliminate Sindhu from the competition.Wimbledon 2022 Prize Money: Total Amount Set at Record 40.35 Million Pounds, 11 Per Cent Hike from Last Year

Earlier today, Indian shuttler Lakshya Sen lost to Chou Tien-chen of Chinese Taipei in hard-fought three games in the quarterfinal match of the Indonesia Masters 2022 which lasted for one hour and two minutes. The world no.9 Indian shuttler Lakshya Sen did not get the best start as the 32-year-old Chinese Taipei shuttler took an early lead. Going into the break Chou Tien-Chen enjoyed a lead of 11-9. Sen lost the opening game 16-21.

In the second game the World Championship bronze medallist Sen took an early lead and dominated the game leading by a huge margin of 11-5 going into the break. Sen won the second game 21-12 and took the match to the decider. In the third and final game, Chou Tien-chen took an early lead of 3-0 and had a lead of 11-5 going into the break. Sen failed to make a comeback losing the third and final game 14-21. Lakshya Sen went down fighting to lose the quarter-final match 16-21 21-12 14-21. The experienced 32-year-old maintained his lead to make it a 2-0 in head-to-head against Sen.