Get latest articles and stories on Sports at LatestLY. India has taken a 1-0 lead in the three-match series. They were given a target of 174 by the Lankans 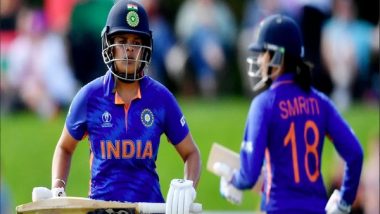 Indian opener made light work of Lankan bowling and chased down the target without losing a wicket. (Photo- ICC)

India has taken a 1-0 lead in the three-match series. They were given a target of 174 by the Lankans. Verma (71) and Mandhana (94) made light work of the Sri Lankan bowling attack with their batting, winning the game for their side.

Earlier, Sri Lanka were bundled out for just 173 in 50 overs. Ama Kanchana (47*) and Nilakshi de Silva (32) were the top two scorers for Lankans. Medium-pacer Renuka Singh was the lead bowler for India, taking 4/28. Meghna Singh and Deepti Sharma took two wickets each.

Opting to bowl first, India put Sri Lanka to bat. India got off a brilliant start, dismissing three batters of Lanka within a space of 11 runs and 6.1 overs. It was Renuka Singh who started off this top-order collapse of Lankans by taking all three scalps.

Captain Chamari Athapaththu and wicketkeeper-batter Anushka Sanjeewani tried rebuilding the innings for SL. But their promising stand was cut short at 31-runs with the dismissal of Athapaththu for 27. Sanjeevani was next to go, being run out by wicketkeeper Yastika Bhatia. Half of the Lankan team was back in the hut for 70. Kavisha Dilhari fell cheaply for 5 to a run-out by the duo of Meghna Singh and Yastika Bhatia.

Nilakshi de Silva and Ama Kanchana put on a 41-run stand for Sri Lanka. Silva was dismissed for 32 at team's score of 123.

Kanchana put 27 and 23 runs stands with Oshadi Ranasinghe and Inoka Ranaweera. SL were bundled out for 173, with Kanchana being the sole survivor of brutal Indian bowling at 47*.

Chasing 174. India was to a fantastic start, with Smriti Mandhana and Shafali Verma forming a 50-run stand in 8.2 overs.