Get latest articles and stories on Sports at LatestLY. The Indian men's doubles pair of Satwiksairaj Rankireddy and Chirag Shetty defeated Singapore's Hee Yong Kai Terry and Loh Kean Hean to cruise into the quarter-finals of the Korea Open Badminton Championships 2022 on Thursday. 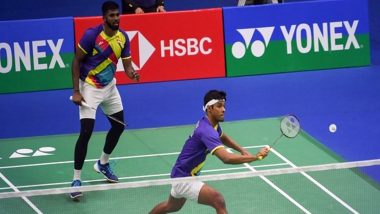 The Indian Open winners took the first game rather easily after gaining a three points advantage at the first mid-game break. The Singaporeans did upped their game in the latter stage of the match but till then it was too late to catch up with the high-flying Indians. Earlier, the All-England semi-finalist An Seyoung of South Korea, who is the world No. 4, thrashed Singaporean Yeo Jia Min, ranked 16, for the final quarter-final berth in the women's singles. The 20-year-old South Korean triumphed over Yeo Jia Min by 21-10, 21-10. At Court 4, the third-seed PV Sindhu also stormed into the quarter-finals. The two-time Olympic medallist Indian defeated world No. 26 Aya Ohori from Japan 21-15, 21-10 in the second round of her women's singles event. PV Sindhu took 37 minutes to notch up her 12th win in as many games against Ohori. She will now be up against Busanan Ongbamrungphan in the quarter-finals.   PBKS vs GT Preview: Likely Playing XIs, Key Battles, Head to Head and Other Things You Need To Know About TATA IPL 2022 Match 16.

While at Court 3, the former world No. 1 Kidambi Srikanth defeated Misha Zilberman of Israel by 21-18, 21-6. The world championship silver medallist Indian had to work hard in the first game but eventually managed to win 21-18. However, the Indian shifted gears in the second game, cruising to a massive 12-0 lead before Misha Zilberman could open his account. Srikanth shrugged off the challenge effortlessly to wrap up the match in 33 minutes.