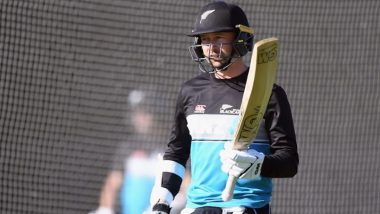 Auckland, May 15: New Zealand batsman Devon Conway is sprinkling kitty litter on practice wickets to simulate spin bowling on the rough, hoping this will help him counter the likes of Ravichandran Ashwin during the World Test Championship final against India next month. BCCI's WTC Plan: 3 Covid-19 Tests at Home Before Players Assemble in Mumbai on May 19.

The 29-year-old has been named in the 20-member visiting NZ squad for the two-match Test series against England beginning on June 2. The squad will then be trimmed to 15 for the World Test Championship Final in Southampton starting on June 18, as per ICC regulations. India vs New Zealand, ICC World Test Championship 2021 Final: 8-Day Bubble in India, 10-Day Quarantine in UK from June 2, Families to Travel.

Conway, who impressed in his first international season for his adopted home country last summer in ODIs and T20s, says he has been sprinkling kitty litter on practice wickets to simulate spin bowling pitching in the rough created by bowlers' footmarks.

"Basically the idea is to get the ball to sort of spit out of the rough," Conway, who has featured in three ODIs and 14 T20Is for New Zealand, told New Zealand broadcaster Spark Sport.

Kitty litter is granulated clay which absorbs waste products of pets like cat or dogs.

"It's a bit harder to play, but good practice. It's about finding a gameplan to combat that and just practice how you're going to play in the game," said the left-handed batsman.

"When it does roughen up and the ball does spit and turn a lot, it's all about being positive."

Conway said he didn't want to rely on just defending against spinners.

“If you're going to look to just defend throughout, at some point there might be a ball that's going to have your number."