The Sports Authority of India (SAI) on Tuesday confirmed that the visa for Sania Mirza's son and the caretaker has been approved to accompany her to the United Kingdom. 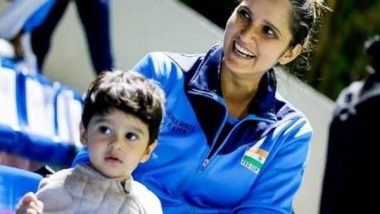 New Delhi, June 1: The Sports Authority of India (SAI) on Tuesday confirmed that the visa for Sania Mirza's son and the caretaker has been approved to accompany her to the United Kingdom.

"The visa for #TOPSAthlete @MirzaSania's son and caretaker to accompany her to the UK has been approved. #TOPS had sanctioned approximately 28 lakhs for Sania who has a protected ranking of 9 in women's doubles to play 4 tournaments in June including Wimbledon," SAI Media tweeted. Indian Sports Ministry Approaches UK Govt for Allowing Sania Mirza’s Son To Accompany Her for Nottingham Open 2021.

Earlier, the Ministry of Youth Affairs and Sports had approached the UK Government, through the Ministry of External Affairs of Government of India, to grant a visa to the two-year-old son of tennis player Sania Mirza, so that she can take the toddler with her while she participates in a series of competitions in the United Kingdom, ahead of the Tokyo Olympics.

Sania, who is a part of the Sports Ministry's Target Olympic Podium Scheme (TOPS), had approached the Ministry requesting help with the visa of her son and his caretaker.

She stated that she cannot leave a two-year-old child behind as she travels for a month. The request was immediately taken up by the Sports Ministry and a letter was sent to the MEA requesting them to take up the matter in the UK through the Indian Embassy in London.