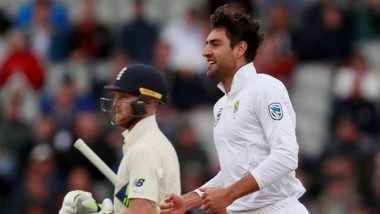 Centurion, December 23: South African pacer Duanne Olivier on Thursday said that the upcoming series against India is massive and bowling to Virat Kohli will be an exciting challenge. India and South Africa will lock horns in three Tests and three ODIs. The first Test will begin on December 26 at the SuperSport Park, Centurion.

"It's massive series. India hasn't won here, so they want to come and win here and for us, we don't want that to happen. For me, it's probably the biggest series I will play so, if selected, there will be those pressures. We're playing against world-class players but at the same time, it's an exciting challenge. Like, I'll need to bowl to Virat Kohli," said Olivier during a virtual press conference on Thursday.

"It will be tough, but it's exciting. We'll be bowling to probably the top four batters in the world. It's like making a statement to them. We are here to compete. We are not just going to roll over. For me, that's very important: throwing the first punch, to know that you are here, you are present," he added. India vs South Africa 2021–22: Anrich Nortje Ruled Out of Three-Match Test Series With Injury.

"It looked like there was a bit of grass, green grass on it and I assume they will probably take a little bit off. I reckon probably a touch slow on day one but it's always a wicket that speeds up and the game moves forward," Olivier said. "And there has always been a result. I don't know when last a Test match, even a four-day game, there was a draw," said Olivier.