IPL 2021 Postponed: England-Bound New Zealand Cricketers to Remain in India till May 10

The remaining players as well as the support staff in various IPL teams and commentators could return home by charter flights. 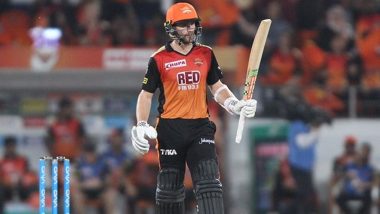 New Delhi, May 5: New Zealand cricketers involved in the now-suspended IPL, including captain Kane Williamson, are likely to remain in India at least till May 10 before flying to England for national duty, their players' union chief said on Wednesday. The remaining players as well as the support staff in various IPL teams and commentators could return home by charter flights arranged by the franchises, New Zealand Cricket Players' Association head Heath Mills said. Indian Cricket Team Likely to Leave for England Early for ICC World Test Championship Final Against New Zealand, Says Report.

Mills is expecting a revision in the travel restrictions for incoming travellers from India by the British government. Only British nationals are allowed to travel from India in the current scenario and they need to serve out a 10-day quarantine at a government-approved facility. IPL 2021 Suspended Owing to Increase in Covid-19 Cases Within the Bio-Bubble.

"Due to the UK border restrictions, that group cannot get into England until May 11. It is obviously challenging for them to wait for another few days (in India)," Mills told ESPNcricinfo.

Besides Williamson, the UK-bound group includes Trent Boult, Kyle Jamieson, Mitchell Santner, Chris Donaldson (trainer), Tommy Simsek (physio), along with Lockie Ferguson, Jimmy Neesham and Finn Allen. The last three will feature in the T20 Blast in the UK starting June 9. Williamson will also be a part of The Hundred, to be played from July 21. New Zealand play England in a two-match Test series, beginning on June 2, before they face India in the World Test Championships finals at Southampton from June 18.

Those returning home from India are Stephen Fleming, Brendon McCullum, Kyle Mills, Shane Bond, Mike Hesson, Tim Seifert, Adam Milne, Scott Kuggeleijn and James Pamment. Mill said a few franchises are contemplating organising a charter flight for this group. "The group going home to New Zealand is a real challenge. Might be one or two of the franchises might put them on a charter plane, which will be fantastic," he said.

"We'll have that confirmed in the next 24 hours," he added. "But there still might be players who aren't part of those groups and trying to get them back via commercial airlines is a real challenge because there aren't too many flights out of India." There were 17 New Zealanders in all involved in the IPL, including 10 players.