Indian IT professionals, most of whom are highly skilled and come to the US mainly on the H-1B work visas, are the worst sufferers of the current immigration system which imposes a seven per cent per country quota on allotment of the coveted Green Card or permanent legal residency. 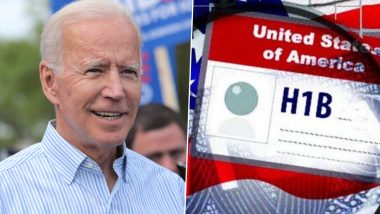 Washington, March 2: The Biden administration on Monday indicated it is still undecided on ending the Trump-era ban on issuing of new H-1B visas, with the Homeland Security Secretary Alejandro Mayorkas asserting that its top priority is the acute needs of individuals fleeing persecution.

In January, the then President Donald Trump had extended the ban on issuing of new H-1B visas till March 31 arguing that the country is having a very high unemployment rate and the US cannot afford to have more foreign workers. H1B Visa vs Green Card: Difference Between The Two as Donald Trump Suspends Issuance of Both Till 2020-End.

"His successor President Joe Biden has revoked dozens of the executive orders of Trump including several of those related to immigration like the lifting the Muslim visa ban or those related to Green Card, the one that imposed ban on issuing H-1B has still not been lifted. It will expire on March 31, if Biden does not issue a fresh proclamation.

"What is the status of the review of the Trump era visa bans for H1B visas and has the White House decided to lift those bans before they expire at the end of the month?" Mayorkas was asked at a White House news conference.

"I don't really (know)--I hate to end the questioning on a question. The answer to which I am not certain. But this goes to what proceeded us. We have so much work to do to repair and to restore and to rebuild that we have a prioritization matrix and of course, the acute needs of individuals fleeing persecution is a high priority. Which brings me to this meeting this morning," Mayorkas said in response.

At the same time, the US Citizenship and Immigration Services has gone ahead with its H-1B application allocation process for the fiscal year beginning October 1, 2021. Last month it announced that it has received enough applications to allocate 65,000 H-1B visas and another 20,000 H-1B visas to those who have completed their higher education from US universities.

Biden has revoked a policy issued by his predecessor during the COVID-19 pandemic that blocked many Green Card applicants from entering the US, a move that will benefit many Indians working in America on the H-1B visa.

Trump, a Republican, issued the ban last year, saying it was needed to protect US workers amid high unemployment due to the coronavirus pandemic. A Green Card, known officially as a Permanent Resident Card, is a document issued to immigrants to the US as evidence that the bearer has been granted the privilege of residing permanently.

Indian IT professionals, most of whom are highly skilled and come to the US mainly on the H-1B work visas, are the worst sufferers of the current immigration system which imposes a seven per cent per country quota on allotment of the coveted Green Card or permanent legal residency.

The H-1B visa, the most sought after among Indian IT professionals, is a non-immigrant visa that allows US companies to employ foreign workers in speciality occupations that require theoretical or technical expertise. Technology companies depend on it to hire tens of thousands of employees each year from countries like India and China.

The US is currently facing a backlog of nearly 473,000 qualified family-based Green Card requests. As a result of Trump's ban on issuing green cards, as many as 120,000 family-based preference visas were lost. But this came as a big boon for issuing employment-based green cards, mainly those on H-1B visas.

Thousands of Indian IT professionals who painstakingly waited for their Green Card received their legal permanent residency as a result in the last few months of the Trump administration.