Get latest articles and stories on World at LatestLY. Former Afghan politicians have urged an investigation into the reports of torture and mistreatment of the citizens in the country's three provinces. 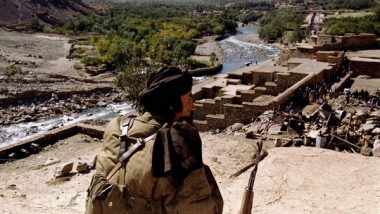 Kabul [Afghanistan], May 15 (ANI): Former Afghan politicians have urged an investigation into the reports of torture and mistreatment of the citizens in the country's three provinces.Reports surfaced that human rights are violated in Panjshir, Takhar, and Baghlan provinces in the country.The former Afghan leaders include - Former chairman of the High Council for National Reconciliation (HCNR) Abdullah Abdullah, a prominent leader Abdul Rab Rasul Sayyaf, and former Vice President Mohammad Karim Khalili, reported Tolo News."Documentary news reports of tragic and tragic events in recent days in Afghanistan indicate that in the provinces of Panjshir, Takhar, Andarabaha and Khost, the military has launched a field trial, killing and torturing oppressed civilians," Abdullah tweeted (roughly translated from Persian)" Such actions are condemned and condemned on the basis of religious rites, human rights, principles of war, national and international custom. According to the history of the country in the last fourteen decades, the launch of the policy of monopoly and elimination has always added to the problems of the people and the country and has led the country to a crisis," the tweet added.

It is important that Amir Khan Muttaqi and Mohammad Alam Izdyar restart the negotiations," added Farhadi.

However, the Taliban has denied the allegations of abuse and civilian casualties in these Afghan provinces, reported Tolo News.

"The Islamic Emirate conducted clearing operations against the people who were causing insecurity. Hundreds of them have surrendered and their weapons and ammunition were seized by the Islamic Emirate. The civilians have a normal life. We seriously deny the reports and propaganda being spread in this regard," said Bilal Karimi, a Taliban deputy spokesman.

Earlier, the European Union Ambassador to Afghanistan, Andreas von Brand, has expressed concerns over the reports of killings of civilians and mistreatment in Panjshir and said it underlines the need for overdue inclusive solutions in governing the troubled country. However, according to the Taliban, they are conducting some clearing operations that have been launched in the provinces of Panjshir and Baghlan. (ANI)