The deaths marked the first fatalities in Israel in the round of fighting with Gaza terrorist groups that began Monday evening, which has seen hundreds of rockets fired at Israeli territory and retaliatory airstrikes from Jerusalem. 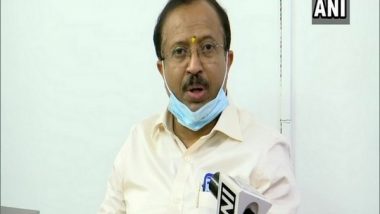 New Delhi, May 12: After an Indian caregiver was killed in rocket launches on Israel by Palestine amid the ongoing conflicts between the two countries, several dignitaries expressed their condolences.

Two women were killed and dozens were injured after the Hamas Islamist movement in Gaza fired massive barrages of rockets on southern Israel on Tuesday, which prompted retaliatory airstrikes from Israeli forces.

Among the deceased was a 32-year-old Indian caregiver, Soumya Santosh. Santosh was killed while her elderly charge, 80, was hospitalised in serious condition after one of the rockets struck her home, The Times of Israel reported citing local media. Indian Woman in Israel Killed in Rocket Attack by Palestinian Militants from Gaza.

Taking to Twitter, Union Minister of State for External Affairs V Muraleedharan said that he spoke to Santosh's family to convey his condolences, while condemning the attack and urging restraint from both sides.

"Spoke with the family of Ms Soumya Santhosh to convey my deep condolences at her tragic demise during the rocket attacks from Gaza today. Assured all possible assistance. We have condemned these attacks and the violence in Jerusalem, and urged restraint by both sides," he tweeted.

Condemning the rocket attacks, Ron Malka, the Israeli Ambassador to India, also conveyed his condolences over the woman's death in the attack. "On behalf of the state of #Israel, I convey heartfelt condolences to the family of Ms. Soumya Santosh, murdered by Hamas indiscriminate terror attack on innocent lives. Our hearts are crying with her 9 years old son that lost his mother in this cruel Terrorist attack," he said in a tweet.

Hailing from Kerala, Santosh is survived by her husband and nine-year-old daughter. "Soumya Santosh from Kerala, India got killed in Israel in a rocket attack by Islamic Terrorist Organisation Hamas. Tribute to her," tweeted Tajinder Pal Singh Bagga, spokesperson for Bharatiya Janata Party (BJP).

The deaths marked the first fatalities in Israel in the round of fighting with Gaza terrorist groups that began Monday evening, which has seen hundreds of rockets fired at Israeli territory and retaliatory airstrikes from Jerusalem.

On Tuesday, Hamas said that it fired 137 rockets in around five minutes in an apparent attempt to overwhelm the Iron Dome missile defense system. Less than an hour later, the two women were killed in an apparently separate attack, reported The Times of Israel.

Earlier on Monday, at least 20 people were killed in Palestine after Israeli forces launched retaliatory airstrikes on the Gaza Strip on Monday, according to the Gaza Health Ministry. This came after Palestinian terror groups reportedly launched a massive barrage of rockets towards Israel. Israel-Palestine Conflict: India Deeply Concerned at Violence in Jerusalem's Temple Mount, Evictions in Sheikh Jarrah & Silwan Neighbourhoods.

The country has been embroiled in conflict over the impending eviction of dozens of Palestinians from East Jerusalem's neighbourhood. Over 70 Palestinians in total are set to be evicted from Sheikh Jarrah in the coming weeks to be replaced by right-wing Jewish Israelis. The Palestinians live in houses built on land that courts have ruled were owned by Jewish religious associations before the establishment of Israel in 1948.