Russian Ambassador to India, Denis Alipov said that Moscow has welcomed the independent foreign policy of India, strengthening of its role as well as its influence in the international arena. 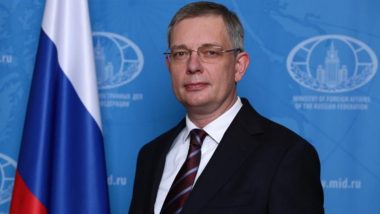 New Delhi, March 5: Russian Ambassador to India, Denis Alipov said that Moscow has welcomed the independent foreign policy of India, strengthening of its role as well as its influence in the international arena.

Touching upon the relations with India, Alipov said, "Prime Minister and the Indian leadership meet the consistent independent policy of the state in international affairs. We have repeatedly stated that we have welcomed the independent foreign policy of India and strengthening of its role and its influence in the international arena. We never put any pressure on India and do not set any conditions. The Indians are now under severe pressure from the United States. I think this is a wrong and useless way."

On the issue of financial ties between both the countries, the envoy said "There is a working bilateral mechanism for mutual settlements in national currencies. Then there will be no obstacles in this area as well. From this side, it also makes sense for India to take a closer look for cooperation with Russia."

"The main focus is on the Indians who remain in Ukraine mostly in the North-Eastern regions for example in the city of Kharkiv. There are now 3000 students there. Not far from Kharkiv in the city of Pesochin there are about 900 people and in the city of Sumy there are 670 people," he added.

Assuring help from Russia for the safe evacuation of Indians, Alipov reiterated, "The Indians turn to us for help and we responded. We created special groups that are ready to take Indians to the territory of the Russian Federation and transport them to India."

Raising several issues of concern in the conflict-ridden areas, Alipov remarked, "But the catch is that the fighting in these areas continues and where the Indians are, our forces are not. There is no way to pick them up in some places that are under fire from Ukraine."

He assured that it will be possible to safely transport to Russian territory and for that Russia provided hundreds of buses which are now waiting to take the Indians out adding that special groups of soldiers have been sent.

"The border services, the Ministry of Foreign Affairs were involved. Groups of diplomats have been sent to Belgorod from the Indian Embassy to deal with this issue on the spot in coordinate actions from the Russian side," he said, adding, "Our buses are close to these places but not there.... but we have to ensure safe passage of the Indians towards the convoys that are waiting for their arrival. There are no deadlines and we will wait as long as it takes."

Replying to a question on attacks on Indians on the Ukrainian-Polish border, Alipov said, "There is a confusion that remains as there is a large influx of refugees."