Ukraine's Foreign Minister Dmytro Kuleba on Saturday called on the European countries to close all their ports for the Russian ships amid the heightened tensions in Ukraine. 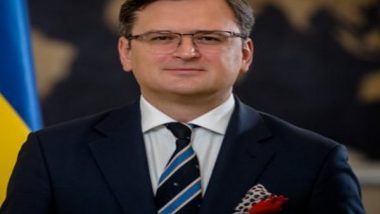 Kyiv, March 5: Ukraine's Foreign Minister Dmytro Kuleba on Saturday called on the European countries to close all their ports for the Russian ships amid the heightened tensions in Ukraine.

Taking to Twitter, Kuleba said, "Help us stop Putin. Close all European ports for Russian ships. The time to act is now."

In a separate tweet, Ukraine's Ministry of Defence shared a video of a shot-down aircraft falling from the sky adding, "Just on the outskirts of Chernihiv, air defence specialists shot down another enemy attack aircraft!"

Earlier, Turkish Foreign Minister Mevlut Cavusoglu said that Turkey has also warned all coastal and non-coastal countries it would not allow warships through its straits Bosporus and the Dardanelles as a part of the Montreux Convention adopted in 1936.

The Montreux Convention was adopted in 1936. It ensures the freedom of passage through the straits for merchant ships both in times of peace and war, but regulations may differ by country.

The document also limits the period of stay in the Black Sea of warships of non-Black Sea states to three weeks. In emergency situations, Turkey has the right to prohibit or restrict the passage of military ships through the Bosporus and the Dardanelles.

Russia launched a military operation against Ukraine on February 26, 2022.

This comes at a time when tensions have escalated between Russia and Ukraine after Russian President Vladimir Putin announced the recognition of the independence of two Ukraine breakaway regions.