Since the beginning of Moscow's war on Kiev, the Russian forces have lost more than 10,000 people, the General Staff of the Armed Forces of Ukraine has claimed. 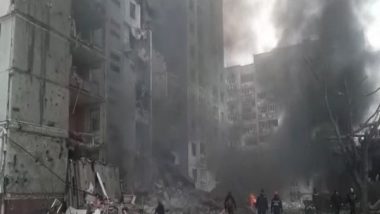 New Delhi, March 5: Since the beginning of Moscow's war on Kiev, the Russian forces have lost more than 10,000 people, the General Staff of the Armed Forces of Ukraine has claimed. Also among the losses were 269 tanks, 945 armoured combat vehicles, 105 artillery systems, 50 MLRS, 19 air defense, 39 aircraft, 40 helicopters, UNIAN reported.

Among the losses are 409 units of motor vehicles, two light speedboats, 60 tanks with fuel, three UAVs of operational and tactical level. Units and units of the invaders are demoralized, soldiers and officers of the occupying army continue to surrender, flee, leaving weapons and equipment on Ukrainian soil, the General Staff of the Armed Forces claimed. Russia Declares Temporary Ceasefire in Ukrainian Cities of Mariupol and Volnovakha for Evacuation of Civilians.

Not only armed units of Ukrainian defenders but also ordinary unarmed people inflict losses on the enemy through active hostilities, demonstrating their civic position to the occupier and inflicting psychological damage on him, it said. Defence Minister Oleksiy Reznikov that the military resources of enemy troops in Ukraine are running out, then there will be a logistical collapse.

The official representative of the Russian Defense Ministry, Igor Konashenkov, said that 2,037 military facilities were destroyed during the operation in Ukraine, RT reported.

"In total, 2,037 Ukrainian military infrastructure facilities were hit during the operation," Konashenkov said. According to the spokesman, 71 command posts and communication centres, 98 S-300, Buk M-1 and Osa anti-aircraft missile systems, as well as 61 radar stations were destroyed.

(The above story first appeared on LatestLY on Mar 05, 2022 05:03 PM IST. For more news and updates on politics, world, sports, entertainment and lifestyle, log on to our website latestly.com).