Amid the unrelenting violence in Afghanistan, President Ashraf Ghani on Sunday said that in the past two decades, the Taliban has become "more cruel and more oppressive." 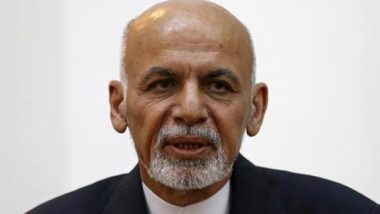 Kabul, August 1: Amid the unrelenting violence in Afghanistan, President Ashraf Ghani on Sunday said that in the past two decades, the Taliban has become "more cruel and more oppressive."

During a virtual cabinet meeting, Ghani said, "Yes, they (Taliban) have changed but negatively. They have no wish for peace, for prosperity, or progress; we want peace but they want surrender (subdued people and government)." Afghanistan Vice President Amrullah Saleh Slams Pakistan for Providing Supplies to Taliban.

This comes as violence has been on the rise in Afghanistan in recent weeks as the Taliban stepped up its offensive after US and NATO troops began withdrawing from the country in June, Ariana News reported.

Blaming the Taliban for creating the conditions for the presence of foreign terrorists in Afghanistan, the Afghan President said that based on his plan, the country's situation will witness a change within the next six months.

"They will not engage in meaningful negotiations unless the situation changes on the battlefield; therefore, we should have a clear stance. For this, there is a need for a countrywide mobilization," he said.

Ghani's remarks come on a day when an Afghan watchdog released a report stating that 1,677 civilians were killed and 3,644 more were injured in Afghanistan in the first six months of this year. This shows an 80 per cent increase in casualties compared to the same period in 2020, the report said.

The troop pullout was one of the points of the deal that the Taliban and the US reached in Doha in February 2020.