Pope Francis Accepts PM Narendra Modi’s Invitation To Visit India, Says ‘This Is the Greatest Gift That You Could Give Me’

Pope Francis on Saturday expressed happiness at Prime Minister Narendra Modi's invitation to visit India and said that it was the "greatest gift" that the Indian leader could give him. 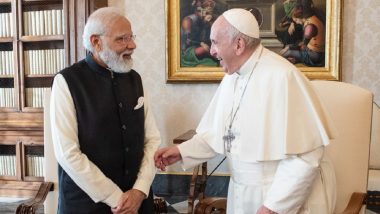 Rome, October 30: Pope Francis on Saturday expressed happiness at Prime Minister Narendra Modi's invitation to visit India and said that it was the "greatest gift" that the Indian leader could give him.

Sharing details of the meeting between PM Modi and the Pope, foreign secretary Harsh V Shringla said that the meeting was characterised by warmth and many issues were discussed between the two. Also Read | 1.5 Million Children in Central Africa Need Emergency Aid: UN.

PM Modi, who is in Rome for G20 Summit, met Pope Francis earlier in the day. It was the first- meeting between PM Modi and Pope Francis. Also Read | 1.5 Million Penguins ‘Supercolony’ Earlier Detected From Space, Discovered on Antarctica’s Danger Islands.

"The significance of the visit can be gauged from the fact that the last papal visit to India was in 1999 when Pope John Paul II visited India. The Pope has graciously accepted the invitation of PM Modi. And in his own words and I am paraphrasing it, he said you have given me the greatest gift. I am looking forward to visiting India," Shringla said," when asked about the details of the meeting.

The Foreign Secretary said the Prime Minister urged the Pope to visit India at the earliest as per his convenience. "Actual details will be worked out through diplomatic channels," he added. He said the two leaders discussed several issues during the "personal" meeting

"They spoke on a number of issues that are topical like dealing with COVID pandemic and what were best practices adopted by India. Other issues like climate change, environment, and unique steps taken by us to help people in distress all over the world whether it was strategic evacuation in Yemen or Iraq or Afghanistan were touched upon," he said.

Shringla said the Pope took a lot of time to explain facts about the Vatican to the PM and artefacts and memorabilia in the Vatican.