TikTok-Oracle Deal Gets Approval From Donald Trump, Walmart Likely to Take Part Too

US Secretary of State Mike Pompeo said earlier this week that the Trump administration was going to continue vetting a deal between TikTok and Oracle to determine if that would assuage Trump's concerns on the national security threat allegedly posed by TikTok. 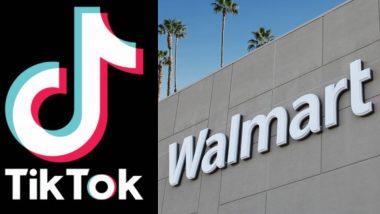 Washington, September 20: US President Donald Trump said on Saturday that he has approved the purchase of TikTok, a video-sharing app owned by Chinese company ByteDance, to US software company Oracle, with the possible participation of Walmart.

"I have given the deal my blessing," Trump told reporters on Saturday, adding "it will have nothing to do with China and it will be totally secure. "That is part of the deal."

Trump said that Walmart could also take part in the deal that will see the creation of a new company, based in Texas, that will assume TikTok's US operations. "I approved the deal in concept. It is a great deal for America," he said.

The US President also said that the deal would include a USD 5 billion donation to an education programme. On Friday, ByteDance filed a complaint with the US federal district court in the District of Columbia, challenging the Trump administration's recent decision to block TikTok in the US.

The US Commerce Department said on Friday that Trump's executive order was going to block US users from using TikTok from November 12.

"We disagree with the decision from the Commerce Department, and are disappointed that it stands to block new app downloads from Sunday and ban use of the TikTok app in the US from November 12," a TikTok spokesperson said in a statement released on TikTok's Communications Team Twitter page on Saturday.

US Secretary of State Mike Pompeo said earlier this week that the Trump administration was going to continue vetting a deal between TikTok and Oracle to determine if that would assuage Trump's concerns on the national security threat allegedly posed by TikTok.

TikTok assured in its statement on Saturday that it was committed to protecting US users' privacy and safety.

"In our proposal to the US administration, we have already committed to unprecedented levels of additional transparency and accountability well beyond what other apps are willing to do, including third-party audits, verification of code security and US government oversight of US data security," a TikTok spokesperson said.

Earlier this month, US media reported that Oracle was going to be announced as TikTok's tech partner but that the deal was probably not going to be structured as an outright sale. Microsoft announced last week that ByteDance would not be selling parts of TikTok's operations to Microsoft. (ANI/Sputnik)