US, UK, Saudi Arabia, UAE Call for Restoration of Government in Sudan

The US, UK, United Arab Emirates (UAE) and Saudi Arabia called for the restoration of the Sudanese government after a military takeover of the country in October, the countries said in a joint statement on Wednesday. 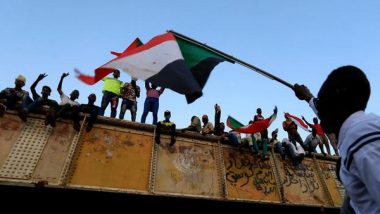 Washington, November 3: The US, UK, United Arab Emirates (UAE) and Saudi Arabia called for the restoration of the Sudanese government after a military takeover of the country in October, the countries said in a joint statement on Wednesday.

"The Kingdom of Saudi Arabia, United Arab Emirates, the United States of America, and the United Kingdom affirm their countries' stance with the people of Sudan and emphasize the importance of supporting their aspirations for a democratic and peaceful nation... We call for the full and immediate restoration of its civilian-led transitional government and institutions," the joint statement said. Also Read | COVID-19 Vaccine Update: Bharat Biotech’s COVAXIN Gets Emergency Use Listing Approval From WHO.

The countries stressed in the joint statement the importance of commitment to the Constitutional Document and Juba Peace Agreement as the foundations for further dialogue about how to uphold a military-civilian partnership for the remainder of the transitional period prior to elections in Sudan. Also Read | Russia Plane Crash: 4 Dead After Belarusian Cargo Plane Crashes While Trying To Land in Irkutsk.

The joint statement also condemned violence between the parties in Sudan and encouraged effective dialogue that ensures peace and security in the country.

The Sudanese military council will meet on Wednesday to determine the political future of Prime Minister Abdalla Hamdok, a military source told Sputnik. Hamdok was previously detained by military forces during the takeover of the transitional government.

The UN Security Council on Thursday similarly adopted a statement on the situation in Sudan that called on the country's military leadership to restore the civilian-led transitional government.