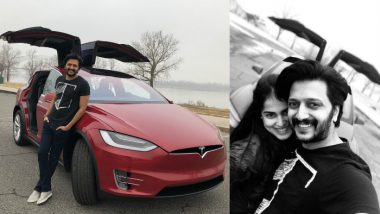 Riteish Deshmukh and Genelia D’Souza are one couple in Bollywood who may not always be in the spotlight but when they do shower their love for each other, it makes us go ‘Awww.’ Their occasional display of affection gets a smile on our faces. This time it was Genelia who has done the needful. The actress gifted her husband a Tesla Model X for his 40th birthday! The actor tweeted a picture of him leaning on the brand new red car.

This makes Riteish Deshmukh the 2nd proud owner of this Elon Musk-started electric car in the country. Businessmen Prashant Ruia, from Essar, happens to be the first who has got a Tesla X registered in Mumbai. The Tesla Model X is one of the fastest cars running on completely electric motors. The SUV has two motors which give the power of a huge capacity. This particular model is said to achieve the top speed of 250 km/hour. The car literally sprints from 100 km/hour in close to 5 seconds. The car combines the functionality of SUV and stupendous Tesla performance. 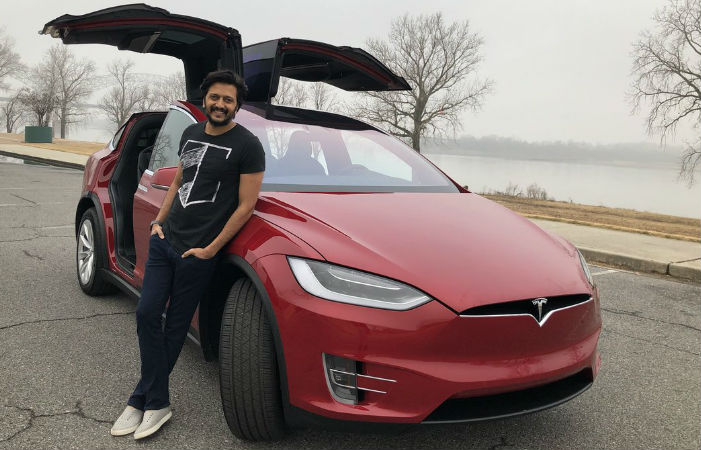 Tesla Model X is one prized possession, its falcon doors giving you the sophistication. It has enhanced autopilot with autosteering. It can also perform features like auto lane changing, lane departure warning along with automatic emergency brakes. What’s more is the car has eight surrounding cameras which give a 360-degree view. There is a 17-inch touchscreen which controls the car. Besides, there are 12 ultrasonic sensors that can detect the surrounding objects. The car with a capacity of 7 is priced at Rs. 55 lakhs, is a posh addition to the eco-friendly cars.

So the Baiko @geneliad surely knows how to make a 40 yr old birthday boy feel like a 20 yr Old. #TeslaX #electric #ecofriendly pic.twitter.com/3mcSEewB45

Riteish is sure a lucky guy to own this gem of a machine. He has very sweetly thanked his wife. He writes, ‘she knows how to make a 40-year-old birthday boy feel like a 20-year-old.’ Well, it is indeed a good way to make him feel younger, right?

(The above story first appeared on LatestLY on Dec 26, 2017 04:51 PM IST. For more news and updates on politics, world, sports, entertainment and lifestyle, log on to our website latestly.com).