BLACKPINK To Collaborate With Selena Gomez? Netizens Support The Singer After BLINKS Troll Her

There were speculations earlier that Ariana Grande will be the person but the reports of Selena Gomez collaborating came soon after. 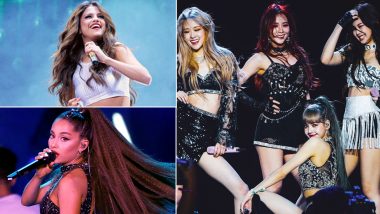 BLACKPINK is right now treating fans with amazing news series. After the announcement of the album, they recently hinted at a possible starry collaboration. Lisa, Rosé, Jisoo and Jennie recently teased their fans asking them 'Feat-?" The BLINKS went crazy over the idea of this collaboration which is a new funky single. There were speculations earlier that Ariana Grande will be the person but the reports of Selena Gomez collaborating came soon after. Ariana Grande Races Past Selena Gomez to Become Most Followed Singer On Instagram.

The BLINKS were totally excited and convinced about AriPink teaming up news. However, as the South Korean girl group is possibly collaborating with Selena, they were upset and started trolling Selena on social media. Now, netizens have come out in support of Selena and have pressed that she is an equally loved and talented singing sensation, that the hate should stop. Check out some of the tweets below.

Now whether the collab is with Selena or Ariana can we appreciate how Blackpink only collaborate with the top women in pop? The last two were so powerful and another one is on the way. @Blackpink

why tf some of you are disappointed 😭 i mean, it's selena gomez oh my god

Imagine dragging and hating an A-list celebrity just because you don't like her collaborating with Blackpink, y'all so ungrateful, a lot of artists wants to collab with Selena Gomez yet we have the pinks that will feature such an amazing and powerful woman!

My tl in one hour went from black pfps, to deactivating, to mourning aripink, to speculating why ariana liked the teaser, to dragging sel, to then defending sel, to thinking of the possibility of selepink being a hit, to listening to selena, and now loving her music. Whew chile.. pic.twitter.com/lfZqhkZNBn

can blinks like PAUSE and revel on the fact that so many women that are huge in the industry like dua, lady gaga, ariana and selena wanted to work with blackpink. like thats still so crazy to me

Earlier, BLACKPINK suprised the fans with the release date of the debut studio album titled BLACKPINK The Album. It will be out this year on October 2. But before that, the fans will get to watch this much-awaited collab of them with another pop singer (Selena probably) in the month of August. Stay tuned for more updates.

(The above story first appeared on LatestLY on Jul 28, 2020 10:26 AM IST. For more news and updates on politics, world, sports, entertainment and lifestyle, log on to our website latestly.com).