Aamir Khan now has Laal Singh Chaddha in his kitty. The film is the official Hindi remake of the Hollywood film Forrest Gump. Aamir will step into the shoes of Tom Hank's role for the remake. 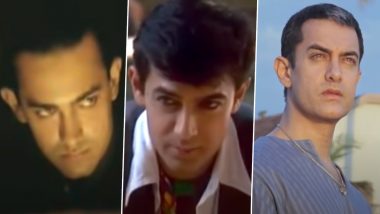 The perfectionist of Bollywood, Aamir Khan is celebrating his 56th birthday today. The actor has worked in the industry for 30 odd years and has a fan following that knows no limit. He kickstarted his career as a child actor in his uncle Nasir Hussain's film Yaadon Ki Baaraat and later made an appearance in his first feature film titled Holi. He then featured in Qayamat Se Qayamat Tak and it was a beginning of a beautiful journey. Khan appeared in several hit films and gave the audience some characters that have become iconic. Confirmed! Salman Khan and Aamir Khan to Star in Andaz Apna Apna 2; Ali Abbas Zafar to Direct!

His films like 3 Idiot,  Secret Superstar, Ghajini, Dhoom 3, PK, Dangal,  Sarfarosh,  Dil, Raja Hindustani are considered as some of his best works. He also founded Aamir Khan Productions in 1999 and produced Lagaan as his first project. Khan is also the winner of numerous awards, including nine Filmfare Awards, four National Film Awards, and an AACTA Award. He was honoured with the Padma Shri in 2003 and the Padma Bhushan in 2010 by the Government of India as well. Aamir has also received an honorary title from the Government of China in 2017.

But while most of his films were a blockbuster at the box office, some roles that Aamir Khan played went unnoticed. The characters were amazing, the storyline was grasping but somehow these film of Aamir's failed to get the recognition that they deserved. To celebrate such roles on the occasion of his birthday, here are 5 underrated roles played by the actor.

Aamir featured in the role of an ice-candy man in 1947: Earth. The film which was a period drama was directed by Deepa Mehta and is possibly one of the best performances by the actor. The audience got to see him in negative role and everyone was astonished by Aamir's acting.  The film was also India's official entry for the 1999 Academy Award for Best Foreign Language Film.

Raakh was a dark crime thriller where we saw Aamir in a very different avatar. This was his first film after his hit debut film Qayamat Se Qayamat Tak. Raakh was a critical hit but failed to make a mark at the box office. However, Aamir made sure his performance was so remarkable that people remember this underrated role.

Aamir joined hands with his wife Kiran Rao for Dhobi Ghat. The 2011 released film received a lot of critical acclamation but failed to mint money at the box office. Aamir's performance was however quite noteworthy. His nuanced performance as a reclusive artist was very undervalued. Dhobi Ghat was also nominated for the 65th BAFTA Awards in the Best Film Not in the English Language category.

Reema Kagti's Talaash boasted of an ensemble cast including Aamir, Rani Mukerji and Kareena Kapoor Khan. The psychological horror film showed Aamir in the role of Inspector Surjan Singh Shekhawat and his encounters with a spirit. The film was a flop at the box office but Aamir's acting in the film was very impressive.

Aamir and Manisha Koirala united for Indra Kumar's Mann. The 1999 released romantic drama did fair business at the box office but is still remembered for Aamir's role in the film.  He was seen as a casanova-turned-ambitious painter and his role is highly underrated. The movie was high on emotional value and Aamir managed to capture hearts with her performances. What Will Aamir Khan's Character In 'Laal Singh Chadha' Look Like? 'Forrest Gump' Obsessed Mr Perfectionist Piques Curiosity!

Aamir Khan now has Laal Singh Chaddha in his kitty. The film is the official Hindi remake of the Hollywood film Forrest Gump. Aamir will step into the shoes of Tom Hank's role for the remake. The film also stars Kareena Kapoor Khan in a pivotal role. Meanwhile, join us in wishing the perfectionist a very happy birthday.

(The above story first appeared on LatestLY on Mar 14, 2021 12:00 AM IST. For more news and updates on politics, world, sports, entertainment and lifestyle, log on to our website latestly.com).