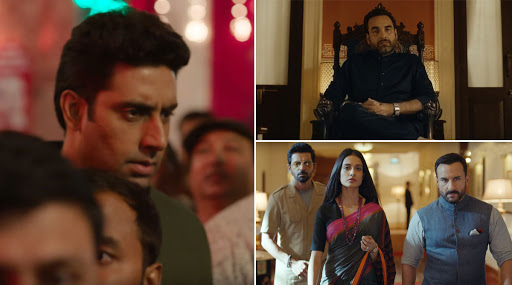 Amazon Founder Jeff Bezos is in India and that can't be just to sight see. He has already had a talk with Shah Rukh Khan, attended a star-studded party, made announcements about investments in India, job generation and now we have a video that reveals the 14 originals that the streamer is working on for this year. Whatever you had wished for has returned with a new season along with a few new ones. Among the originals getting a new season are Four More Shots Please, Breathe, Mirzapur and The Family Man. Abhishek Bachchan's Breathe 2 and Richa Chadha's Inside Edge 2's First Promo Out! (Watch Video)

As for new series, there's The Last Hour, Bandish Bandits, Dilli, Pataal Lok, Gormint, a documentary on Jaipur Pink Panthers The Sons of Soil, Mumbai Diaries 26/11 and many more. Inside Edge season 2 has already been aired while The Forgotten Army will hit the streamer soon. Among all these, Dilli looks quite refine with Saif Ali Khan, Sunil Grover and Dimple Kapadia at the helm of affairs.

Don't miss the teasers of Breathe 2 starring Abhishek Bachchan and Amit Sadh along with Mirzapur 2.

The lineup is simply amazing and we just can't wait for these series to begin. Which one are you interested to watch?