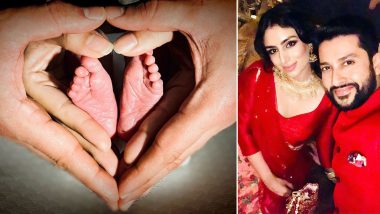 2020 certainly won’t be a gloomy memory for actor Aftab Shivdasani and wife Nin Dusanj when they look back in time, for the couple welcomed their bundle of joy, their daughter on August 2, 2020. The baby was born in the wee hours of Sunday and both proud parents, Aftab and Nin took to social media to let fans know of the good news and also to welcome their ‘little bit of heaven’. Aftab Shivdasani Unblocks Hansal Mehta On Twitter And Suggests WhatsApp Instead!.

Aftab and Nin tied the knot in 2014 in a private ceremony and are often seen sharing pictures of major life events on social media. The interactive couple obviously decided to share an adorable photo of their newborn’s super small pair of legs enclosed in their hands to announce her arrival. Aftab Shivdasani Talks About Safety Measures on Sets While Shooting Amid Pandemic: 'Get Used to the New Normal'.

‘A little bit of Heaven has been sent to Earth’.. With God’s blessings, @nin_dusanj and I are elated to announce the birth of our daughter.. we are proud parents and a family of three now. ❤️👸🏻👼🏻🤴🏻💫❤️

Nin also shared a black and white version of her husband’s photo with the same caption. Aftab wrote, "A little bit of Heaven has been sent to Earth’.. With God’s blessings, @nin_dusanj and I are elated to announce the birth of our daughter.. we are proud parents and a family of three now." Actors Ishita Dutta and Vivek Oberoi were the first ones to congratulate Aftab and Nin on the arrival of their first baby. Here’s wishing good health to both Nin and the baby and congratulations to Aftab too.

(The above story first appeared on LatestLY on Aug 02, 2020 08:25 AM IST. For more news and updates on politics, world, sports, entertainment and lifestyle, log on to our website latestly.com).