Banita Sandhu is all set to work with her October team again as she has been roped in for Shoojit Sircar's upcoming film, the Udham Singh biopic which stars Vicky Kaushal. The actress recently confirmed the news in an interview. Read more deets inside. 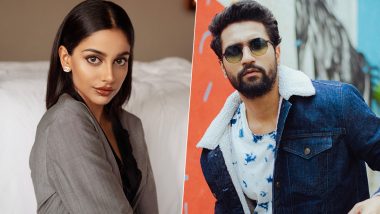 After making a successful debut with Varun Dhawan's October, actress Banita Sandhu is now gearing up for her Tamil debut with Adithya Varma. The film is a remake of Vijay Deverakonda's Telugu hit Arjun Reddy which was recently and remade in Hindi with Shahid Kapoor in lead. While Despite the amount of flak Kabir Singh received for its content, the film managed to become a huge box office success. Banita is all set to star opposite Chiyaan Vikram's son Dhruv Vikram in the Adithya Varma. The Immortal Ashwatthama: Vicky Kaushal's Film To Be Shot In Greenland, Tokyo and New Zealand (Read Deets).

The actress has now bagged another big project and this time its Bollywood. After October, the actress is all set to work with director Shoojit Sircar again, for his Udham Singh biopic which stars Vicky Kaushal in lead. Recently, in an interview with Bollywood Hungama, Banita confirmed her role and said, "Yes I am in Sardar Udham Singh. We shot for it in Punjab. Vicky Kaushal is amazing and it was great to be back working with the October team again."

This is the first time Banita will be working with Vicky and we are already getting a good feeling about it. Earlier, we have seen the first look Vicky from the biopic and we have to say he looked quite impressive. After churning out successful films like Piku, October and many more, Sircar is expected to once again stun the audiences with this one. In the film, Vicky will be essaying the character of Singh who assassinated Michael O' Dwyer, the former lieutenant governor of Punjab in pre-Independent India. Singh was convicted and hanged for murder in July 1940. Vicky Kaushal Visits the Golden Temple Just before Commencing Shoot for Sardar Udham Singh Biopic (View Pic).

The film has been produced by Rising Sun films and Ronnie Lahiri. It is slated to release in 2010. The coming year is expected to be packed for Vicky who may be starring in as many as six films including the likes of Takht, Sam Manekshaw biopic, The Immortal - Ashwatthama among others.

(The above story first appeared on LatestLY on Nov 20, 2019 09:22 AM IST. For more news and updates on politics, world, sports, entertainment and lifestyle, log on to our website latestly.com).