Amjad Khan Birth Anniversary: Five Movies Of The Actor You Should Watch And Not Just Sholay

Amjad Khan is more than just Gabbar Singh in Sholay. He has done some of the most striking roles in Indian Cinema which many aren't aware of. Check out five of his movies which deserve as much love as Sholay. 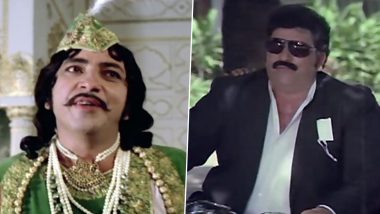 The moment we hear the name Amjad Khan, we get reminded of 'Kitney aadmi they?' from Sholay instantly. The fear he instilled in the gaonwalo got us too. But remembering Khan just for Sholay will be a crime. Yes, a crime because this brilliant actor has done some really amazing roles which could easily be far better than what he did in Sholay. Of course, we will be biased towards Sholay as that's one movie which is the epitome of being all things Bollywood. But Khan is more than just Gabbar Singh. Amjad Khan’s Iconic Gabbar Character From Sholay Was Originally Offered to This Bollywood Actor

Khan's dynamic personality, the ease with which he slips into any character, the menace that his eyes can display together made him one of the formidable villains of the industry. Today, on his birth anniversary, let us tell you about the movies of his which deserve as much dekko as Sholay.

Amjad Khan plays a loyal friend who scouts his singer friend Amitabh Bachchan from his village and makes him a star. That's the beauty of such actors. They can be absolutely vicious as a villain but can be extremely intense in a positive character. We all wanted a BFF like him after watching Yaarana.

A repenting father who finds it difficult to accept his illegitimate son in the film. Amjad Khan beautifully renders the dilemma of a man who dumped his pregnant girlfriend to marry for money. No over-exaggeration, no over the top melodrama, just restrained act which powers through this highly commercial Amitabh Bachchan starrer.

Khan played the author of Kamasutra and also the narrator of this erotica that created a lot of controversies. His narration was nuanced and his character reeks of comedy which makes it one the most enjoyable character in this film.

A lawyer by profession but he takes his role of love counselor a little more seriously here. He is the friend, philosopher, lawyer, and guide you would need for all your love woes.

Amjad Khan is the last nawab here who is on the bring of relinquishing his crown to the Britishers. The pain, agony, and hurt of losing what's yours are fantastically portrayed by Khan. It won't be wrong to call as one of Khan's best performances ever.

(The above story first appeared on LatestLY on Nov 12, 2020 08:10 AM IST. For more news and updates on politics, world, sports, entertainment and lifestyle, log on to our website latestly.com).